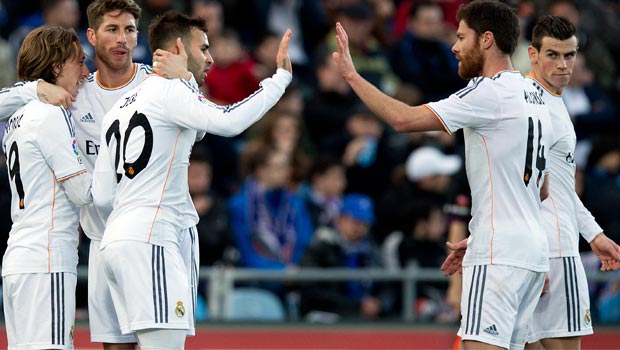 The pressure may have been on Real Madrid going into Sunday’s derby clash with Getafe but Los Blancos wasted precious little time in asserting their authority to ultimately make it a three-way tie once again at the top of La Liga.

Atletico Madrid and Barcelona had both recorded convincing home victories on Saturday to open up a cushion at the summit, with Real having to contend with being on the road and without star striker Cristiano Ronaldo against a perhaps less-heralded city rival.

Jese Rodriguez though underlined his burgeoning reputation with a wonderful finish inside five minutes to settle any potential nerves and the title challengers never looked back.

Karim Benzema clinically converted a swift break to double the advantage and make the game all-but safe in the 27th minute, before Luka Modric sealed the points with a drilled effort from just outside the box in the 66th.

Although only goal difference separates the top three with Barca holding the advantage, few would argue that Real are actually the form side of the title challengers.

Sunday’s win extended their unbeaten run to 25 matches, going without defeat since a 2-1 reverse at the Nou Camp in October, and they have now seemingly added a defensive solidity to their attacking prowess, particularly since the winter break.

Goalkeeper Diego Lopez described the win over Getafe as ‘key’ ahead of a home clash against Elche and a Champions League last-16 clash at Schalke but, as far as the title is concerned, the massive clash at the Vicente Calderon is fast approaching on March 2.

Los Blancos recently beat Atletico both home and away in the Copa del Rey but need to replicate that sort of result after losing the home league clash against their arch rivals back in September.

With a defeat at Barca also blotting their copybook, Real will see the return fixtures as particularly vital as the head-to-head record takes priority over goal difference when splitting sides level on points in La Liga.