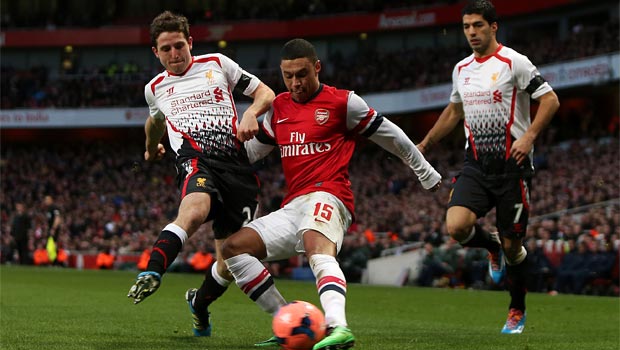 Alex Oxlade-Chamberlain claims Arsenal’s 2-1 FA Cup fifth-round win against Liverpool will provide the team with a huge confidence boost ahead of the Champions League clash against Bayern Munich on Wednesday.

The Gunners edged closer to their first piece of silverware since the
2005 FA Cup with a hard-fought win against their Premier League title rivals, who had thrashed them 5-1 at Anfield only eight days ago.

Oxlade-Chamberlain opened the scoring in the 16th minute at the Emirates Stadium before Lukas Podolski made it 2-0 early in the second half.

Steven Gerrard got Liverpool back into the contest from the penalty spot after Luis Suarez was fouled in the 59th minute.

And, while the Gunners were fortunate not to concede another penalty after Suarez appeared to be brought down in the area by Oxlade-Chamberlain himself, Arsene Wenger’s men showed some resolve to hang on for the win which gives them a quarter-final home tie against Everton.

In addition to being pleased about his goal, Oxlade-Chamberlain feels the moral-boosting cup success will stand the players in good stead ahead of the last-16 first leg tie against Champions League holders Bayern Munich this week.

He said: “Especially after the result away, we knew we had to turn it around and put in a display.

“My goal got us off to a good start. We did well to keep it together and hold on.

“There are penalty shouts in most games. You just have to worry about the ones that are given and thankfully that one didn’t.

“We have got a massive game on Wednesday and this win is a confidence boost.”

Regardless of the mood in the Gunners’ camp, the performance of the Gunners will not have sent many shivers down the spines of the German giants and that is reflected in the betting.

Bayern are installed as the 1.75 favourites to win on Wednesday, with Arsenal available at 4.59 and the draw at 3.44.