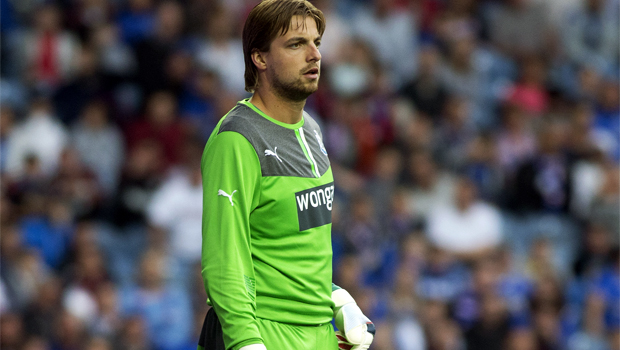 Newcastle goalkeeper Tim Krul hopes to be fully fit in time for Magpies’ opening Premier League fixture away to Manchester City on August 19.

The Dutchman has been sidelined since dislocating his shoulder in the derby game with Sunderland in April, after which he underwent surgery, but has been stepping up his fitness regime in the past fortnight.

Krull made his comeback between the posts on Tuesday evening in a friendly against Scottish side Rangers at Ibrox, turning out for the first 45 minutes, during which time he had to face a penalty from Gers captain Lee McCulloch, which he almost got to, showing that his sharpness has not disappeared. The game ended 1-1, but more importantly for Krul, it was a positive start to his comeback.

The 25-year-old knows that there is no substitute for competitive action, saying: “I’ve had a great couple of weeks training with all of the lads. It has been all about getting the confidence of making a few good saves again.

“You can train when you’ve been injured, but the best test is always to get back out there, and train again. I’ve just been focusing on the game and making saves. I’ve been training hard to get back in time.”

He added: “I’ve done two weeks back here, and obviously went into that on the back of some hard work in Portugal. I’m just glad to get through that first game.

“It’s a different feeling to training. It’s nice to get 45 minutes under my belt.”

Even thought Krul is desperate to be ready for the City clash, Newcastle boss Alan Pardew has warned he may need to be careful with the keeper because he has been on the sidelines for so long.

“He is one of the best keepers in the world, so we want him up to speed. That means we have to be careful,” Pardew said.

“We must make sure that he returns properly, and is fully fit for the season.”