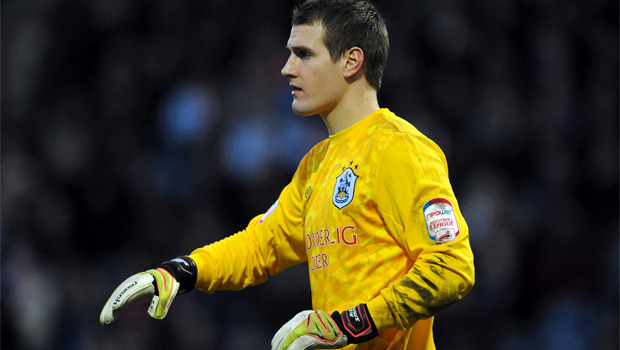 Town’s Huddersfield-born goalkeeper Alex Smithies has signed a one year contract extension until the summer of 2016, with the Club having the option for a further year to June 2017.

His previous contract was set to run until June 2015 with the Club also having the option of a year’s extension at that point.

Ever present in his first Championship campaign, the 23 year-old played a significant role as Town preserved its status last season. Alex’s form was so influential that his teammates voted him their Player of the Year at Town’s 2012/13 Annual Awards ceremony.

He has again been in excellent form this term with the Terriers currently having the second best defensive record in the division.

Having just turned 23 years old in March, Alex has already made 164 career league appearances but remarkably is still one of the youngster ‘keepers in the Sky Bet Championship. Despite his age Alex has also already accumulated a significant number of games compared with many rival ‘keepers.

Huddersfield Town Manager Mark Robins told htafc.com that the deal was an important step for the Club:

“We want to keep our quality players and we’re delighted that Alex has agreed to extend his contract at Huddersfield Town for the long term. I think he can see the progression of the Club on and off the field and as a local lad, who is home-grown, he has a real passion for the Club and drive to add to that success.

“He has been in superb form this term and has been integral, not only to our impressive goals against record, but also in helping the team adapt to a new style of football.

“Alex is still a young ‘keeper who will only get better with age and games, but he already has experience well beyond his years. He works hard on the training pitch and is constantly looking to improve, which is what we desire from our players”

Smithies, a former England under-19 international, graduated from Town’s Academy before breaking into the First Team in November 2008. He has made 127 appearances for the Terriers in League 1. His play-off final penalty heroics at Wembley on 2012 helped secure promotion before becoming an ever present during Town’s first year back in the Championship.

Alex is the fourth youngest keeper in the Championship and ranks 14th in terms of career league appearances so far.