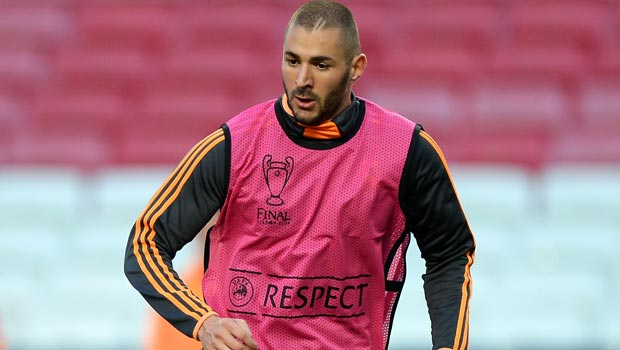 Real Madrid striker Karim Benzema hopes he will still be at the club next season and is confident he will be fully fit for World Cup duty with France.

Benzema is out of contract with Madrid in 2015 and with the striker yet to sign a new deal, reports are linking the Frenchman with a move away from the Bernabeu.

The 26-year-old has a long-term admirer in Arsenal manager Arsene Wenger but has no intention of leaving the Spanish capital any time soon.

After guiding them to Champions League glory earlier this month, Benzema hopes to extend his five-year stay at Real Madrid, where he feels at home.

“I feel at home in Madrid. I am really at ease,” he told L’Equipe.

“Playing at Real Madrid is a joy and fills me with pride because it is the greatest club in the world and also because I have come through some difficult moments in my five years here.”

Reports in the Spanish press earlier in the week suggested Real are lining up a new contract for Benzema, with coach Carlo Ancelotti and president Florentino Perez hoping to retain the majority of their Champions League-winning squad.

The striker however will now focus his attention on next month’s World Cup in Brazil. He has a slight groin complaint but is confident he will be fully fit for Les Bleus’ opening match against Honduras on June 15.

“In the Champions League final I played at 40-50 per cent of my capabilities. The pain prevented me from playing my true game,” he continued.

“Was it a risk? You don’t get to play in the Champions League final every year and I could not miss it.

“I am receiving treatment and I will be at 100 per cent for the World Cup.

“We are not worried. I have spoken with the physios and while Sunday’s game [a friendly against Paraguay] might come a bit too soon, I will be back in full training by Wednesday.”