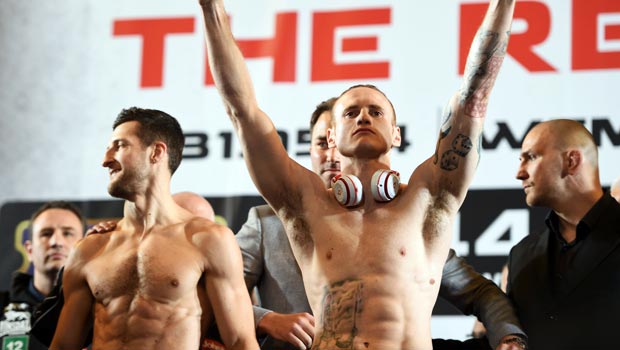 George Groves believes victory against Carl Froch in Saturday’s highly-anticipated rematch might be “written in the stars” after his controversial defeat last time.

Groves was stopped in questionable circumstances last November when Froch successfully defended his WBA and IBF titles in Manchester.

However, the London-born fighter has a second chance to prove himself after being awarded a rematch and believes winning the world titles at Wembley – in his home city and in front of 80,000 spectators – would be justice.

“Maybe it’s written in the stars that after not getting the win the first time, I’ll win the world titles at Wembley in my home city in front of a huge crowd,” Groves said.

“I’ll only be able to be at peace with the first fight and put it to bed after I’ve won on Saturday because there is unfinished business.

“This fight picks up where the last fight left off. I feel that I deserved to win the first fight and now I plan to go out and become world champion on the biggest stage.

“It’s going to be an awfully sweet feeling and a great experience. It’s going to enhance my career and boost my public profile.

“Until the rematch is done I can’t say ‘I’m happy’, but everything happens for a reason.”

Froch, 10 years Groves’ senior at 36, is the favourite going into the bout on Saturday night and is priced at 1.36. Groves is the underdog at 2.29 but is confident he will become world champion.

The challenger insists Froch is not smart or quick enough to compete and is eyeing a knockout blow as early as the third round.

“He’s not that clever or cute, it doesn’t need a special strategy to beat him,” Groves added.

“Once he walks on to shots he won’t get up. My trainer is saying five rounds, I’m saying three.

“Whatever he does this time, I will have it covered.”