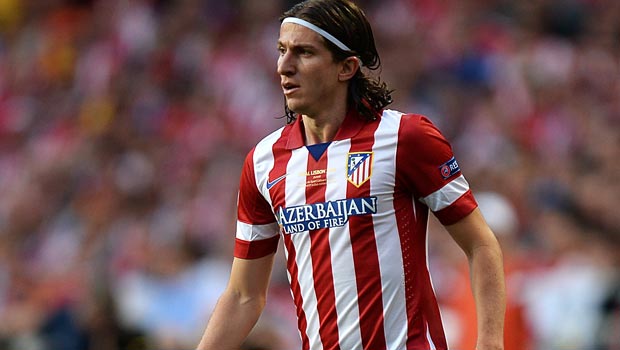 Chelsea have suffered a setback in their pursuit of left-back Filipe Luis after his agent revealed Atletico Madrid are unlikely to sell the player.

Chelsea have made a new left-back one of their top priorities with Ashley Cole out of contract this summer.

Luis has impressed in the position for Atletico this season and made an impression on Blues boss Jose Mourinho in the two legs of their Champions League semi-final encounter.

Reports had previously suggested Chelsea were in talks with Luis as part of a triple raid on Atletico, with Diego Costa and Tiago also targeted.

However, Luis’ agent, Garcia Quilon, insists the La Liga title winners are reluctant to sell the highly-rated Brazilian left-back – or anyone else for that matter.

“The interest is there, but Atletico will not sell,” Quilon is quoted as saying by The Metro.

“They are determined to keep much of the block for next season. We’ll see what is happening with different players, but the intention is not to sell to anyone.”

Should Chelsea miss out on Luis, reports suggest they will step up their interest in Southampton and England left-back Luke Shaw or Sevilla defender Alberto Moreno, who is also wanted by Liverpool and Real Madrid.

They will be less worried with their pursuit of Costa, who is thought to have agreed a £31.8 million move to Stamford Bridge earlier this month.

The Spain frontman is widely expected to complete the switch after the World Cup after being named in Vicente del Bosque’s 23-man Spain squad on Saturday.

The 25-year-old also added eight goals in nine Champions League appearances as Diego Simeone’s side reached the final, only to be beaten in extra-time by neighbours Real Madrid.