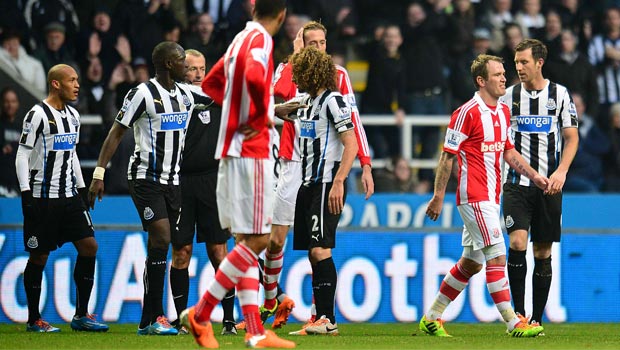 Stoke City manager Mark Hughes has called for his team to move on from the 5-1 thrashing by Newcastle United on Boxing Day and focus on the trip to Tottenham on Sunday.

The Potters saw their four-game unbeaten run in the Premier League end in a demoralising defeat to the north-east giants on Boxing Day, with Marc Wilson and Glenn Whelan both receiving red cards, along with the head coach who was sent to the stands after expressing his anger at the first sending off.

Hughes, who has been charged by the FA for his actions, has insisted that the result will not affect the team and that the players are focused on the game against Tottenham.

“No, absolutely not. I think the events up there will bring us closer together, to be perfectly honest,” he said.

“When you feel aggrieved, you pick yourselves up and go again. That’s the type of attitude I have from this group, so we are looking forward to Sunday now.

Stoke will go into the game without the suspended pairing of Whelan and Wilson, whilst first-choice goalkeeper Asmir Begovic has been ruled out for up to six weeks after the Bosnia-Herzegovina international broke a finger in training on Christmas Day.

They are the only selection dilemmas for Hughes for the game on Sunday so far, and the Welshman will be hoping to put some pressure on ninth-placed Southampton who sit six points ahead of the Potters, with three points at White Hart Lane this Sunday.