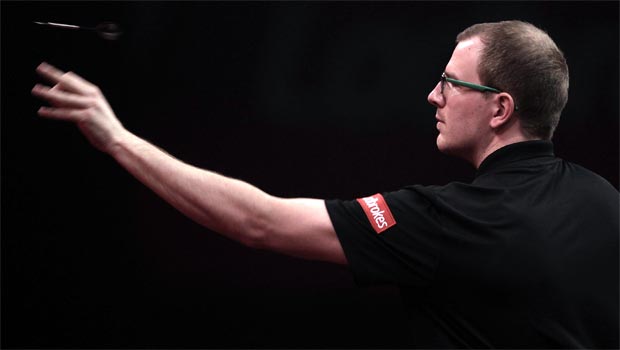 The 30-year-old was trailing three times but managed to win the last six legs to secure victory and set up a last-eight clash with either Michael van Gerwen or Gary Anderson.

Webster has endured a tough tournament so far, with the 2008 BDO World Championship winner defeating Mensur Suljovic 3-2 in the first round, following up with a 4-3 win over John Henderson.

“I’m over the moon. I can’t believe I won… but I never envisaged I’d lose, if that makes sense. I’m contradicting myself, to a degree!” Webster said.

“The way the circuit works, my career was hanging by a thread coming into the tournament. So not only to win a game, but to get to the quarter-finals… I’ve done really well,” he added.

“My career’s back on track. I’m still in the biggest tournament in the world, and who knows now?”

Elsewhere in the tournament, Peter Wright claimed a 4-3 victory to set up a match against Wes Newton, who earlier saw off Robert Thornton 4-1, while Simon Whitlock beat Kevin Painter 4-0.

Ian White produced a thrilling comeback to defeat Richie Burnett 4-3 after trailing 3-1, while Devon Petersen pulled off a shock 4-1 win over world number 11 Justin Pipe to complete the third round.