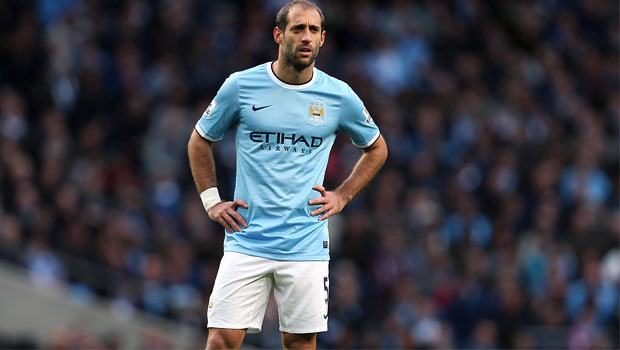 Manchester City underlined their title aspirations with a 7-0 thumping of Norwich City on Saturday and Pablo Zabaleta feels there will be no let up from the team, following Manuel Pellegrini’s hardball tactics with Joe Hart.

There has been plenty of pressure on the England goalkeeper this season given a number of high-profile errors, and the latest – against Chelsea last Sunday – was the final straw for Pellegrini.

The Chilean tactician had been publicly backing Hart up until that point but his failure to deal properly with a long ball which allowed Fernando Torres to tap in a late winner led to his axing from the team.

When and if he gets his place back remains to be seen but on the evidence of Saturday it will not be next week as his replacement, Costel Pantilimon, was given little opportunity to show that he isn’t up to the task.

City dominated from the off and the Romanian was a virtual spectator as Bradley Johnson put through his own net before David Silva, Matija Nastasic, Alvaro Negredo, Yaya Toure, Sergio Aguero and Edin Dzeko scored to ensure the Citizens quickly and emphatically got back to winning ways.

And Zabaleta feels that Pellegrini’s handling of the goalkeeper situation will keep everyone at the club firmly on their toes.

The Argentinian said: “Well, you know, that is football. The manager makes decisions.

“We know in this team now the performance of everyone should be good week in, week out because we have two players in each position who can play.

“Sometimes mistakes might cost the place but we are a big squad and we need to try to do well to keep the place in the team.”

Pellegrini has suggested that a ‘rest’ will do Hart the world of good ahead of a packed schedule for the rest of the year, with four games to come in November and nine in December due to Champions League and League Cup commitments.