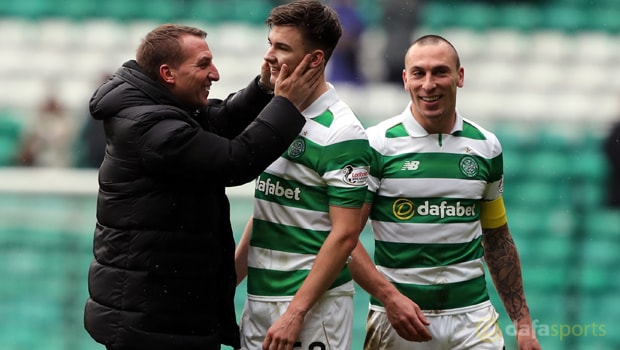 Celtic youngster Kieran Tierney has credited his side’s hard work for their dominance this season.

The Bhoys are unbeaten in domestic fixtures and having already claimed the League Cup, are through to the semi-finals of the Scottish Cup and currently sit an incredible 27 points clear in the Premiership League standings.

Sunday sees them host Old Firm rivals Rangers and another victory will help them edge closer to a sixth straight domestic title.

Having seen their advantage over their rivals gradually eroded in recent years, Brendan Rodgers has improved the side immensely after taking over in the summer.

However, despite their superiority, Rodgers has not allowed standards to slip and is determined to ensure they maintain their levels until the end of the season.

Tierney’s form has been particularly impressive, with the 19-year-old’s displays seeing him further cement his reputation as one of the UK’s most exciting young defenders.

Much of his side’s success has been attributed to their financial advantage but the teenager insists it has not been that easy.

Instead he says they deserve credit for the way they have applied themselves and has put their improvement down to good old-fashioned hard work.

“The points gap is big but that’s not come easy,” he said.

“We’ve worked hard since day one for that. Every single day since pre-season, it’s all been geared towards the league and cups and we’re doing well but it’s not come easy for us.”

“We work hard every single day and give 100% no matter who we’re up against.”