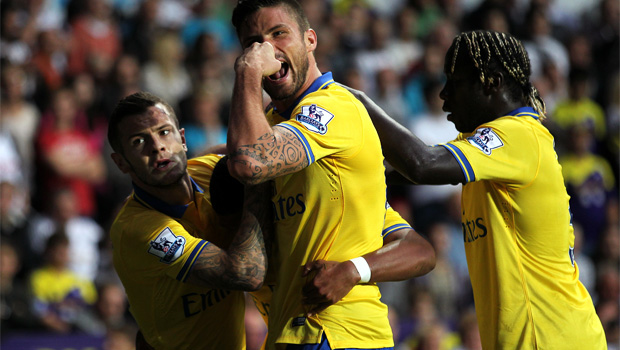 Both Manchester United and Manchester City slumped to defeat in the Premier League on Saturday, while Chelsea secured a 1-1 draw at Tottenham.

Goals from Morgan Amalfitano and Saido Berahino secured a 2-1 victory for West Brom at Old Trafford, condemning United to their worst start to a premier league season in 24 years.

Boss David Moyes, who replaced Sir Alex Ferguson in the Old Trafford hot-seat over the summer, says United must “move on” from their poor start.

He said: “You’re always going to have bad results in football; it is how you deal with them.

“We will move on and look forward to the next one. There are lots of games here and you get ready for the next one.

“I’m concerned after the game but only because we didn’t play well. We can put it right.”

Yaya Toure and Edin Dzeko gave the visitors the lead twice at Villa Park but Karim El Ahmadi, Leandro Bacuna and Andreas Weimann gave the home side the win.

Meanwhile, Arsenal were the main beneficiaries of their title rivals dropping points after picking up a 2-1 win at Swansea.

Serge Gnabry and Aaron Ramsey grabbed the goals for Arsene Wenger’s men at the Liberty Stadium, with Ben Davies’ late volley not enough for the home side.

The Gunners top the table with 15 points from six games, with Tottenham two points further back. Chelsea and Southampton, who beat Crystal Palace 2-0 on Saturday, sit tied on 11 points. City are in fifth and United 12th.