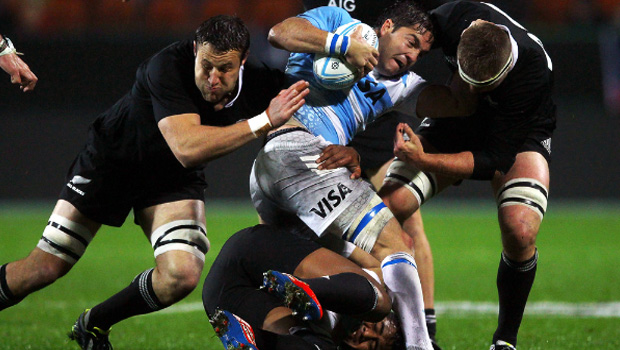 New Zealand are one step closer to winning the Rugby Championship after securing a 33-15 win over Argentina in La Plata.

The All Blacks face South Africa at Ellis Park next weekend in the final match of the competition, with the Springboks having kept their own title hopes alive with a 28-8 win over Australia.

However, New Zealand ran in four tries against the Pumas, securing a bonus point victory in the process. This means a win, draw or even a narrow defeat against South Africa will be enough for them to clinch the title.

Meanwhile, the Springboks will need a bonus point win of more than seven points to be proclaimed champions.

History suggests this will be difficult, with South Africa having not beaten New Zealand by at least four tries in the last nine years.

Winger Ben Smith secured the crucial bonus point in the last minute of the match against Argentina, flummoxing the Pumas defence before diving between the posts to secure his second try of the game.

Argentina restricted the visitors to just one try in the opening half, with Julian Savea scoring at the corner. The second half was all New Zealand though, with Sam Cane scorching down the left touchline to score before Smith picked up his first try.

In the day’s other game, first half tries from Adriaan Strauss and Zane Kirchner gave South Africa a commanding half-time lead over Australia before Willie Le Roux scored a late try. Three penalties and two conversions from fly-half Morne Steyn added to the tally.

An early Christian Lealiifano penalty and a late Chris Feauai-Sautia try were all Australia could muster.