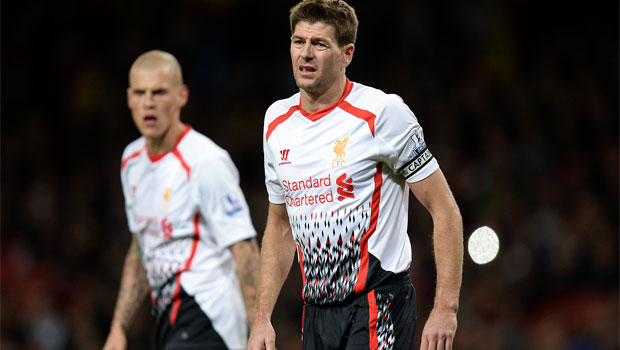 Liverpool talisman Steven Gerrard believes striker Luis Suarez is vital to their top four hopes this season, but he doesn’t expect the Uruguayan to remain beyond the end of the campaign.

Suarez tried to force through a transfer to Arsenal in the summer but Liverpool stood firm and held onto the forward.

A January move looks unlikely, as the Reds rejected a bid in excess of £40million in the summer and will demand a higher price in the winter window, but Suarez is certain to be the subject of interest next summer.

It remains to be seen as to whether the Gunners will reignite their interest, but reports in Spain suggest Real Madrid have identified the 26-year-old as their top target and are planning a move at the end of the season.

Suarez will have just two years left on his current deal when the season comes to a close, meaning Liverpool could be forced into a sale if he has not agreed to a new deal as his price will plummet the closer he gets to the end of his deal.

Gerrard has been delighted with Suarez’s form to date and feels the forward could well be crucial in their bid to secure a top four spot and a place in next season’s Champions League, but he remains unsure as to whether or not the striker will remain at Anfield beyond the end of the current campaign.

“Luis is in good form. The team are playing well, so January won’t be a problem,” he told the Daily Mail.

“But come the summer, I think depending how Liverpool have done will determine what goes through Luis’ mind.

“His goals, his performances and his form will be the key to whether we finish in the top four.”