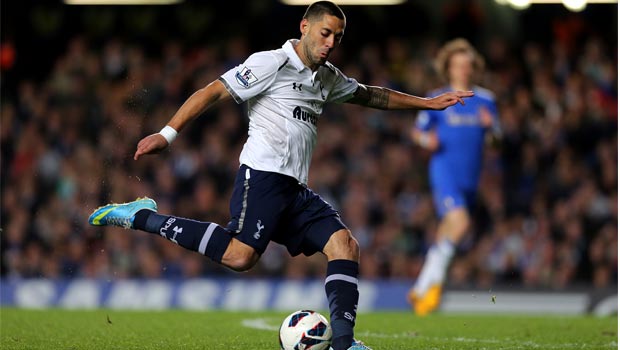 Fulham head coach Rene Meulensteen has confirmed the club are in talks with Clint Dempsey about a loan move back to Craven Cottage.

Speculation about a short-term deal for the USA international has been gathering pace for the last week and was given a bit of substance on Thursday when Fulham defender Sascha Riether posted a picture of himself and Dempsey out in London on Twitter.

Meulensteen has now revealed the club have been in talks with the 30-year-old who has undergone a medical ahead of a possible loan deal being agreed.

Fulham tweeted that if Dempsey were to join it would only be for January and February, a period that would cover eight Premier League games, including the clashes with fellow relegation rivals West Ham, Sunderland and Norwich.

Meulensteen said: “Clint will be a boost for us.” Should the deal go through it would mean a return for Dempsey to the club he represented for five years before he joined Tottenham in 2012.

Dempsey has since left Spurs and moved back to America to play in the MLS, joining the Seattle Sounders in the summer.

Meulensteen will hope Dempsey’s capture is only the first of a number of signings in January, while he is confident of retaining the services of current star man Dimitar Berbatov.

The former Manchester United and Spurs striker has been linked with a move away from west London recently amid reports he is unhappy at the club.

In his press conference on Friday, Meulensteen stated the Bulgarian was fully committed to the Whites and would not be leaving any time soon.