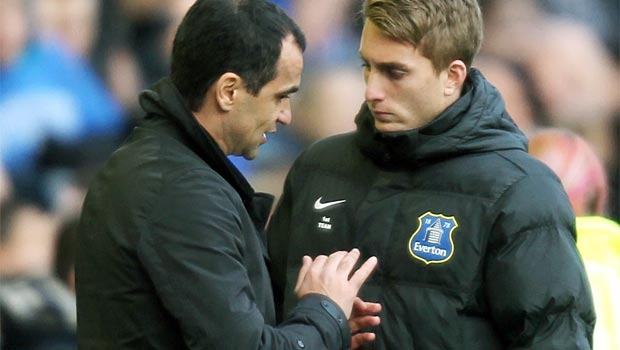 Everton manager Roberto Martinez fears he could be without on-loan winger Gerard Deulofeu for months after he tore his hamstring in Saturday’s 4-1 win over Fulham.

The 19-year-old has been a huge hit on Merseyside since joining the Toffees on a season-long loan deal from Barcelona, scoring his third goal for the club last week as Everton snatched a point in a 1-1 draw with Arsenal.

His superb strike at the Emirates Stadium earned him just his second start for the clash with Fulham at Goodison Park, but the day was to end prematurely for the Spaniard as he had to be taken off on a stretcher after 64 minutes.

Martinez now fears he will have to cope without the talented forward until the final third of the season, although he is still hopeful of an earlier return should further medical exams produce some positive results.

“Straight away he felt it and it’s something we will assess,” said Martinez. “Gerard is like a sprinter and clearly the hamstrings are exposed in those sort of injuries.

“We don’t know how big the tear is going to be but we expect Gerard to be out for some time.

“It is unfortunate because I thought he was ready to play a big role.”

Deulofeu’s injury took the shine off what was another good day for Everton as they climbed up into fourth in the Premier League with a comprehensive win over Fulham.

The Toffees could find themselves even higher in the standings by the end of the Christmas period, with games against Swansea (a), Sunderland (h), Southampton (h) and Stoke (a) to come.

Asked how Everton could maintain their current good run of form, Martinez said: “The answer is we need to get everyone fit and make sure the competition for places is ferocious and that way we can be competitive in every game that we go into.”