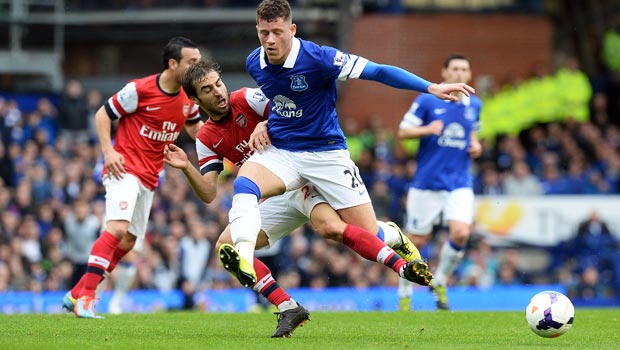 Everton midfielder Ross Barkley says Roberto Martinez’s side are entering the final phase of the Premier League season with the belief that they can beat anyone.

Barkley wants Everton to take the confidence gained from beating Arsenal into the final six games of the season in the battle to secure UEFA Champions League qualification.

Everton’s 3-0 win at Goodison Park on Sunday enabled them to close the gap to Arsenal to just a point with Martinez’s side also having a game in hand on the fourth-placed Gunners.

Barkley, who appeared as an early substitute following an injury to Leon Osman, enjoyed the victory over Arsenal and is targeting a top-four spot on the back of six consecutive Premier League wins.

“We’ve got to go into the games now thinking we can get as many points as possible,” the England midfielder told evertontv.

“We’ve done well on the pitch and that can give us confidence going into the rest of the games.

“You can see that we are good enough to be in the top four. On our day we can beat anyone.”

Toffees boss Martinez wasn’t sure that Barkley could complete 90 minutes against Arsenal after the England midfielder sustained a calf injury against Fulham recently.

But the Spaniard was impressed by Barkley’s dominant show of energy and passing accuracy after he came off the bench so early on in the 3-0 rout.

The 20-year-old now looks set to retain his place in the Everton side as they travel to Sunderland on Saturday.

Barkley added: “I’m always disappointed not to start but it’s a team game and I was sat on the bench watching. Ossie went off, I went on and I enjoyed it.

“I love the big games. You’ve got to step up and shine and show what you are capable of.”

Sunderland are 4.74 to stop the Everton winning streak at the Stadium of Light with Everton 1.77 in the 1X2 betting and the draw priced at 3.40.