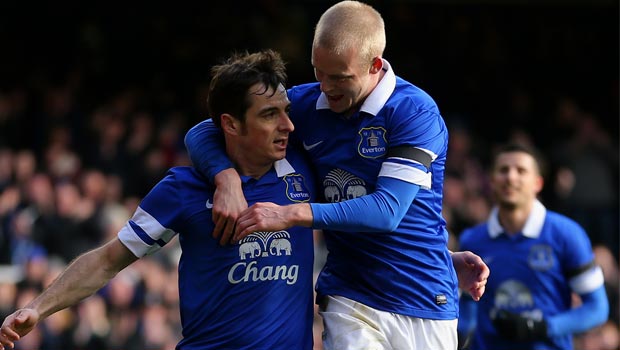 Leighton Baines believes Everton’s upcoming “must-win” home matches will determine where they finish in the Premier League this season.

The England left-back was disappointed with the Toffees’ 4-1 elimination from the FA Cup quarter-finals at the hands of Arsenal last Saturday.

However, it has left Roberto Martinez’s side with just the league to focus on between now and the summer with a fifth-place finish and Europa League qualification still well within their grasp.

Everton currently sit five points adrift of Tottenham in fifth but they have two games in hand on the north Londoners and will leapfrog them with two wins.

And with a South Wales double-header to come at Goodison Park in their next two matches, Baines is looking to secure maximum points from both Cardiff and Swansea respectively.

“We’ve got a couple of home games now that we know we’re capable of winning and that we probably know we must win in terms of having a push for the back end of the season with just the league to focus on,” he said.

“We want to finish strongly and those two games will hopefully be a platform we can build on.
“We’ve got to get it out of our system. It’s our job as players and professional footballers to not wallow in it too long and find a way to move on.”

Meanwhile, Baines has rebuffed claims that they might need to curb their attacking style of play in order to ensure they pick up much-needed wins having been caught out on the break several times during the cup defeat at Arsenal.

He added: “The nature of our play is that we are a bit expansive at times but it’s something we don’t want to compromise on. We just want to get better at it, and ultimately that will lead us to getting better results.

“We’re sticking to our guns and our style. We’re buying into it and trying to improve every day. It’s got to be a collective thing.”