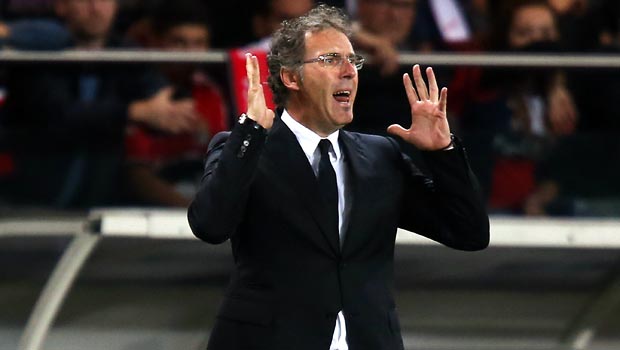 Laurent Blanc has called for concentration from his Paris Saint-Germain players ahead of their Champions League last-16 second leg home clash against Bayer Leverkusen on Wednesday despite holding a 4-0 first-leg lead.

The French champions appear to have more than one foot in the quarter-finals of this season’s tournament after a brace from Zlatan Ibrahimovic and further goals from Blaise Matuidi and Yohan Cabaye sealed a comfortable win in Germany a fortnight ago.

However, Blanc is refusing to let complacency creep into his squad going into the second leg at the Parc des Princes this week as he has demanded they go out with the sole intention of securing another victory and extend their current winning run to six matches.

History and form is against Leverkusen as no side has every progressed in the Champions League after losing the first leg 4-0, while they only ended a five-match losing run in drawing 1-1 at Hanover 96 on Saturday.

But Blanc is refusing to rest on his laurels as he said: “You always have to be demanding with your team.
“In the Champions League, qualification is decided in the second match. For now, we don’t have it yet so we have to see through qualification.

“Whoever plays, we have the desire to win. That’s important because the biggest teams, even when going through difficult periods, they need to concentrate.”

Blanc is spoilt for choice in attack with Edinson Cavani available after sitting out Saturday’s 3-0 win at Bastia after going back to Uruguay for personal reasons. But Brazilian Lucas Moura has impressed in his absence, while Argentine Ezequiel Lavezzi staked his claim to start with two goals at the weekend.

Leverkusen’s mission was made even harder by the loss of influential midfielder Jens Hegeler, who suffered a torn ankle ligament against Hanover.