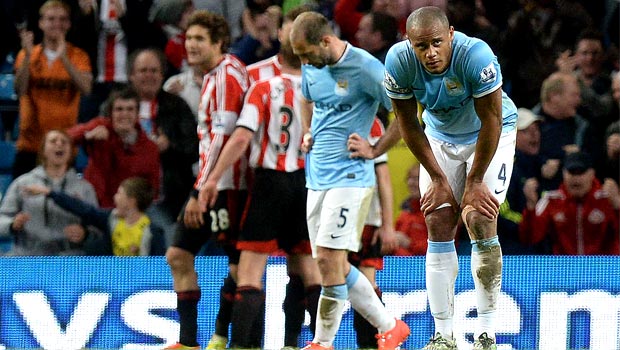 Manchester City suffered a further setback in their quest to regain the Premier League title after being held to a 2-2 draw by visitors Sunderland.

Few could have envisaged the bottom-of-the-table side getting anything at the Etihad on Wednesday evening, and when Fernandinho latched on to Sergio Aguero’s pass to score after just two minutes the game looked up for the Black Cats.

Gus Poyet’s side are fighting for Premier League survival though, and showed great spirit to not just cling on but to take the game to City, and it was Connor Wickham who struck after 73 and 83 minutes to send Liverpool and Chelsea fans everywhere into unexpected raptures.

In truth the visitors outplayed a nervous and desperate City at times, and it was slightly unjust when Samir Nasri salvaged a point with only two minutes on the clock, with keeper Vito Mannone seeing the ball squirm out of his hands to trickle over the line.

A draw was not the required outcome for either side, with City now six points behind Liverpool with just the one game in hand, while Chelsea are four points in front of them.

As for Sunderland, despite this courageous effort, they remain planted firmly at the bottom of the table and truly need a miracle to avoid the drop.

City boss Manuel Pellegrini concedes that his side have slipped up badly when it mattered most.

“Of course the (title) chances are less than before the match. It was very important for us to win the three points, for different reasons we couldn’t but we continue fighting to the end,” he said.

“I think we couldn’t take out of the mind the game against Liverpool and that was the consequence why the team didn’t play well.

“We needed more intensity but our mind maybe was not in the moment to do it.

“Maybe at the moment Liverpool and Chelsea have better chances than our team because we are in third position but we still continue fighting until the last game.”