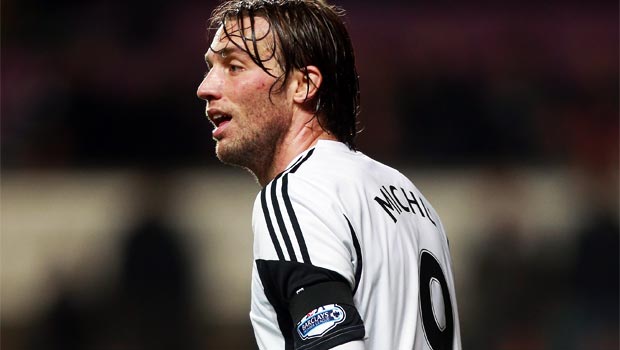 Swansea’s hopes of beating Napoli in the Europa League have taken a hit as talisman Michu has been ruled of Thursday’s first leg of the
last-32 tie at the Liberty Stadium on Thursday.

New boss Garry Monk had been hoping to reunite the Spaniard with Wilfried Bony in the Swans’ attack but will now have to rethink his strategy as Michu has suffered a late setback on his return to training.

“The last two days, he (Michu) has reacted well,” Monk said. “He had a slight bit of swelling and that’s the only thing which has kept him back.

“He had got to a good level with his rehab and was just about to go back into full training when his ankle swelled up a little bit.

Some good news for Swansea fans though is the fact that Bony should at least be fresh as Monk perhaps signalled his intentions to target Europa League glory when he selected a weakened line-up for Swansea’s FA Cup fifth-round clash at Everton last weekend.

Bony was kept on the bench even when the tie was in the balance in the second half and will be ready to go when he leads the Swans’ attack against Rafael Benitez’s side on Thursday night.

The Ivory Coast international has emerged as a leader in the absence of Michu, last season’s stunning find by ex-boss Laudrup, and with seven goals in his last eight starts in all competitions, is in red hot goalscoring form.

Midfielder Jonathan De Guzman, who scored his third goal of the season in Swansea’s 3-1 FA Cup defeat at Goodison Park, knows all about the quality of the side they will face.

“They are very strong up front,” said de Guzman. “I played against one of their players, Dries Mertens, when I was in Holland.

“He has good quality as does Higuain and [Jose] Callejon, and their midfield is very strong as well.

“I played against Higuain when I was at Villarreal and he has a real nose for goal.”

The good news for Swansea fans is that Higuain could well be absent from the Napoli line-up as he sustained a back injury in their 2-0 Serie A win over Sassuolo last weekend.