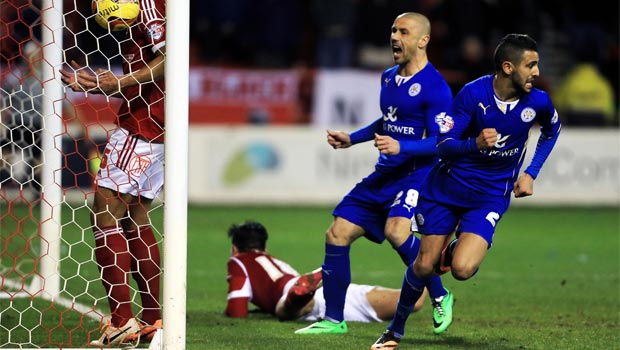 Leicester City boss Nigel Pearson says the past two encounters could have a motivational influence on Wednesday night’s east midlands derby against Nottingham Forest at the City Ground.

The Foxes snatched a play-off place from Forest on their own turf at the end of last season, when Anthony Knockaert clinched sixth spot with a last-minute winner.

However, Leicester City could also be looking to exact some revenge, as their only home defeat in the Championship this season was inflicted upon them by Billy Davies’ men in November.

“Last season was a more like a cup-tie experience because of what was at stake and we were reliant on others sides as well,” said Pearson.

“But that has gone now. Whether it has a bearing tonight, you could argue that from a motivational side it may do.”

England Under-21 defender Liam Moore has recovered from a broken rib and is fit for the Championship leaders, who are seven points clear at the top with a game in hand.

Moore was injured in the 2-0 win over Middlesbrough last month and was expected to still be sidelined when the eagerly-anticipated return clash with Forest came around.

But Pearson told BBC Radio Leicester: “He should be available.

“He has trained over the last week and we are pretty happy with how he has been progressing, so that’s good news.”

However, Sean St Ledger (groin) and striker Tom Hooper (shin) are out while Kevin Phillips could become Leicester City’s oldest ever outfield player if he is selected.

The Foxes, on offer at 2.40 to win, have not tasted defeat in their last 11 league games but come up against a Forest team without a loss in 13 Championship fixtures – the longest run by any Championship club this season.

Jack Hobbs and Guy Moussi are doubts for Billy Davies’ side, who are
2.81 to win at home, after both missed Sunday’s FA Cup loss to Sheffield United.

The smart money could be on a draw at the City Ground with four of the last seven meetings having finished in a stalemate, which is available to back at 3.25.