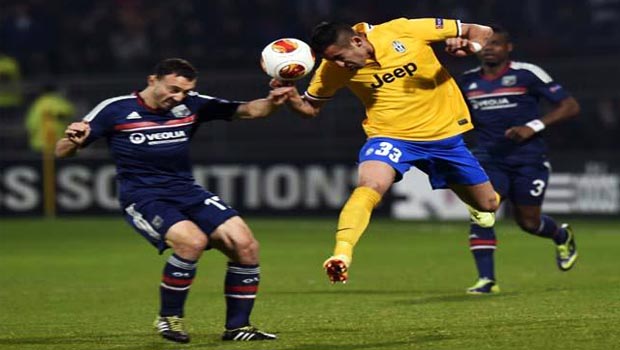 Juventus coach Antonio Conte chose not to rest players in his side’s Serie A clash against Livorno on Monday, despite the proximity of the match to their vital Europa League quarter-final second leg against Lyon.

Conte picked his first-choice line-up, aside from the injured Andrea Barzagli and suspended Arturo Vidal, to face lowly Livorno who are in a relegation battle.

A brace from Spanish forward Fernando Llorente was enough to secure a 2-0 home win for Juve and maintain their eight-point cushion over nearest title challengers Roma with six games to go.

“It was the team I had to use,” said Conte. “I didn’t have many alternatives. I’m happy we did well, because behind us they keep winning, but our confidence remains high.”

Juve host Lyon on Thursday in the second leg of their Europa League quarter-final, having returned from France with a 1-0 lead.

“We cannot take our foot off the gas, as in three days we play again and we want the semi-final,” added Conte.

“It would be great to reach the final four, for Italian football as well as for Juve. Lyon have some good players on the counter, so the tie is far from over.”

Juventus are 1.32 in the 1X2 betting for Thursday’s second leg with the draw available at 4.80 and Lyon 8.76 to come away with an upset victory.

Juve defender Giorgio Chiellini admitted it was important the Serie A champions answered back with a win after slipping up to a 2-0 defeat at Napoli last weekend, which threw the title race open again.

“A single slip-up was physiologically likely, but we reacted well to that. We put in a good performance, there’s still a way to go yet, but the finish line is getting closer and closer,” he told Sky Sport Italia.

“In the last month and a half I went from being injured to playing every three days, so that was not easy, but the individual is helped by the collective.

“We are ready to go all the way both in Serie A and Europe. We’re getting closer to the finish line and that fires us up.”