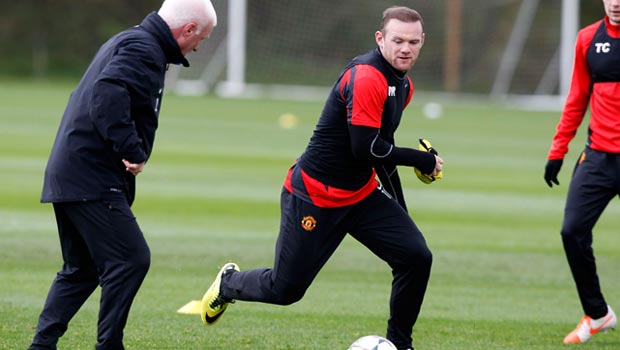 Wayne Rooney returned to full training on Tuesday ahead of Manchester United’s Champions League quarter-final second leg in Munich, but Bayern coach Pep Guardiola was convinced he would play anyway.

Rooney was forced to sit out United’s 4-0 win over Newcastle on Saturday with a bruised toe, raising fears that he might miss the trip to the Allianz Arena.

However, the striker took a full part in David Moyes’ training session on Tuesday morning and, providing he suffers no ill effects, is likely to be restored to the manager’s starting line-up on Wednesday evening.

Speaking at his pre-match press conference, Guardiola stated that he is convinced that Rooney – and winger Antonio Valencia – will definitely play.

Rooney’s return is a welcome boost to Moyes as he is without the injured Robin van Persie and the cup-tied Juan Mata for the game.

Ryan Giggs, who has also been struggling with injury, also took part in the session on Tuesday although Marouane Fellaini missed out.

Evra, who missed the first leg through suspension, was forced off during the win against Newcastle after picking up an injury but he made training ahead of United’s flight to Germany.