Don’t expect a classic in the East Lancashire derby 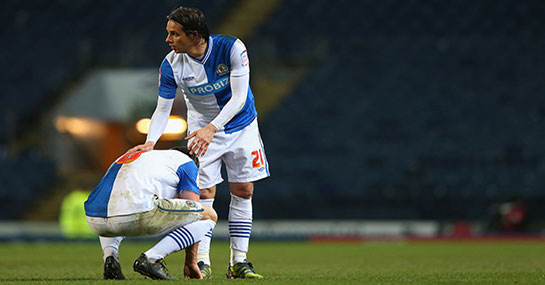 Described by some as the ‘fiercest of local derbies’, this renewal of the East Lancashire clash comes at a time when neither side has much to roar about.

With just one win between them in their last 16 games collectively, Blackburn and Burnley have seen any hope of a return to the top flight next year all but disappear.

In fact, Blackburn’s season has been so bad that you couldn’t blame fans for taking a cautionary look over their shoulder towards the drop zone. Rovers’s decline has even seen some high profile criticism, including from Doctor Who himself, Matt Smith; commenting that the club is “a farce, an absolute joke”.

With that in mind, one would suspect Michael Appleton’s side would be fired up as they look to get one over on their neighbours and start to rebuild their season. And with the intense rivalry between the two sides, and the stat that the last four renewals have seen 18 cards brandished, you can expect the referee to be busy.

Burnley’s recent record in this tie leaves a lot to be desired, with Blackburn coming out on top in seven of the last eight meetings. But with the home side priced at 27/20, they look impossible to fancy on current form, so the search for value could perhaps continue elsewhere.

Our special ‘Total Result’ market may have thrown up an interesting, and possibly profitable, stance to take on this tie. With an injury list longer than the honours list at fellow Lancastrians, Manchester United, including the influential Colin Kazim-Richards, it wouldn’t be a surprise if Appleton sets up to simply avoid defeat here.

For that reason, a defensive approach, coupled with their seeming inability to score recently, means the price of 29/10 on a Draw and Under 2.5 Goals on the Total Result market looks well worth taking.

Either side may manage to nick a win, but what’s for certain is that a home defeat would leave the Venkys ownership further feeling the wrath of the Ewood Park faithful.

All odds and markets correct as of the time of publishing