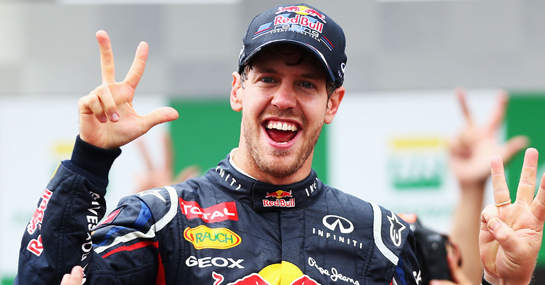 A stat pack reflecting on the 2012 Formula One season

The 2012 Formula One season came to a thrilling climax on Sunday when Sebastian Vettel won the drivers’ championship in Sao Paulo.

For the 27th time in F1 history, the title was decided in the final race – and what a race it was in Brazil!

Vettel succeeded in claiming the top-seven finish he needed to be crowned champion and is now the 5/4 favourite to be the overall winner in 2013.

Before then, though, we reflect on a season that saw seven different drivers win the first seven races.

Here we take a look at some of the interesting stats to emerge over the past eight months.

2 – Jenson Button may have finished the season by finishing first in Brazil, but it was Lewis Hamilton who came out on top in the battle of the Brits in the driver standings, two points clear of his McLaren team-mate.

3 – Vettel claimed his third successive F1 title at the weekend and is only the third driver alongside Juan Manuel Fangio and Michael Schumacher to win it three times in a row.

7 – Veteran German Schumacher finished seventh in Brazil on his last race before retiring again for a second time.

26 – Vettel is currently on 26 race wins in his F1 career and is hoping to one day overhaul Schumacher’s record of 91 victories.

42 – Fernando Alonso led Vettel by 42 points at the halfway point of the season before the German turned the title race on its head.

281 – The number of points Vettel finished with at the top of the driver standings, some three points clear of Alonso.

308 – Sunday marked the 308th and final race of Schumacher’s record-breaking career in F1.