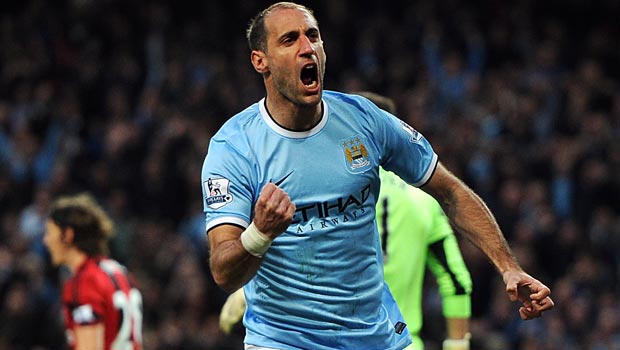 Manchester City right-back Pablo Zabaleta is refusing to rule out the possibility of winning the Premier League title.

The Citizens still have a chance of lifting the trophy for a second time, but they will need Liverpool to slip up in their final few games.

Liverpool are currently top of the Premier League by six points, but Manuel Pellegrini’s side do have one game in hand on their title rivals.

City’s 3-1 win over West Brom on Monday night has given them a fighting chance, with Zabaleta getting on the scoresheet in the process.

This Sunday’s game between Chelsea and Liverpool will be crucial in the title race, with City desperate for the London club to give them the advantage once more.

City themselves must now focus their attention on their game against Crystal Palace, and Zabaleta is adamant that his side can still win the Premier League.

He said: “We still have four games to go until the end.

“It’s going to be tough, but we need to keep believing. We know in football that anything can happen.

“We have put pressure on Liverpool. We now need to wait for Liverpool to drop some points, which they can do in some games.

“We must move on to the next game and get three points at Crystal Palace.

“Nothing is over. In football, you know anything can happen.

“The most important thing is to keep working hard, keep doing everything possible until the end and then we will see.”

Palace are 6.86 to upset City’s title ambitions, but Pellegrini’s side are the heavy favourites at 1.44, with the draw available at 4.35.