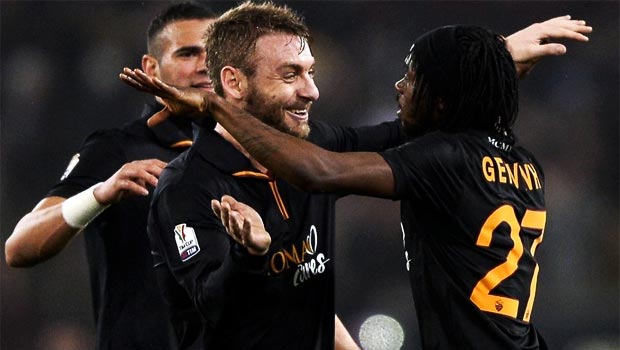 Roma edged an exciting Coppa Italia semi-final first leg against Napoli, coming out on top 3-2, with Gervinho scoring twice – including the winner.

The former Arsenal man, who scored a total of nine goals during his time at the Emirates, has been in great form since moving to Italy, and has helped Roma to second place in the Serie A table behind Juventus, but with the latter looking nailed on to lift the title, the Coppa Italia looks their best bet of lifting some silverware this season.

And it began well for the hosts when Gervinho popped up after 13 minutes to lift the ball over Pepe Reina and stroke home to make it 1-0. Roma then went further ahead just after half an hour when Kevin Strooman unleashed a thunderbolt past Reina.

In command at half-time, the home fans had barely sat down to enjoy the second half though when goalkeeper Morgan De Sanctis gifted Napoli a lifeline, letting Gonzalo Higuain’s cross-shot slip through his hands and over the line.

Napoli coach Rafa Benitez then saw his Belgian striker Dries Mertens level the tie on 70 minutes as he showed a smart turn of foot to race past the Roma rearguard and shoot home.

The last 20 minutes saw the home side struggle to make an opening, but then with just two minutes left on the clock, up stepped Gervinho to stab home from close range for his second goal of the game, and ultimately, the winner.

Coach Rudi Garcia knows just how vital the Ivorian is to Roma.

“He can still get better,” he said.

“He needs the faith of his manager and above all his team mates because when he gets the ball he’s always looking to cause problems to the opposition.

Next week’s second leg in Naples could be another cracker, but first Napoli will entertain AC Milan in the league this weekend, and are 2.03 with Dafabet to come out on top.