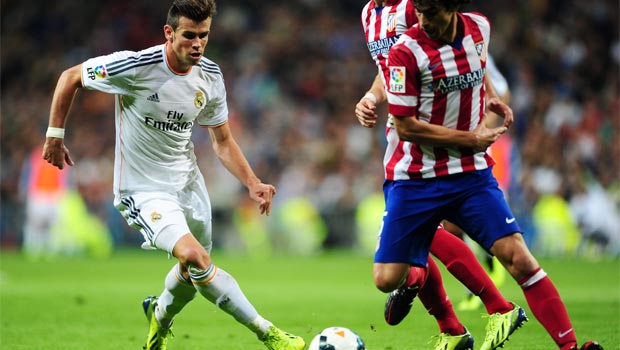 Real Madrid are one step away from the Copa del Rey final after building up a 3-0 lead against city rivals Atletico in Wednesday’s semi-final first leg.

Derby meetings between the two sides are always lively encounters, and this was no exception, especially as Atletico turned up at Estadio Santiago Bernabeu as La Liga table-toppers.

However, Real were in no mood to let their arch-rivals gain the upper hand in Spain’s premier cup competition as well, and set about trying to build a decent first-leg lead. As it transpired, there was a touch of luck about the first goal after 17 minutes as defender Pepe raced towards the penalty area and saw his shot ricochet off Emilio Insua and past goalkeeper Courtois.

Atletico looked lively on the break and had a couple of chances to level, notably from Godin early in the second half, but fell two behind after 57 minutes when a brilliant through ball from Angel Di Maria gave the Jese the simplest of tasks.

Godin was unlucky not to pull one back when his header was cleared off the line by Luka Modric with 18 minutes left, and that was to prove even more costly when Real virtually booked their place in the final just 60 seconds later as Di Maria’s long range effort struck Miranda and left Courtois stranded as it spun in.

Atletico can count themselves unlucky to see a 25-match unbeaten run end with the help of two own goals, but now have a mountain to climb to turn around a three goal deficit in the second leg next Wednesday.

“They had the good fortune to open the scoring with a shot that was going out of play and that helped them settle.

“The players are feeling as you would expect after a 3-0 defeat. They are down because they are lads who want to win and when they don’t they are not happy.”

And Atletico’s task will be even harder with the news that striker Diego Costa will miss next week’s return after being shown a third yellow card in the competition on Wednesday night.

Do check out all the latest Spanish football odds with Dafabet.