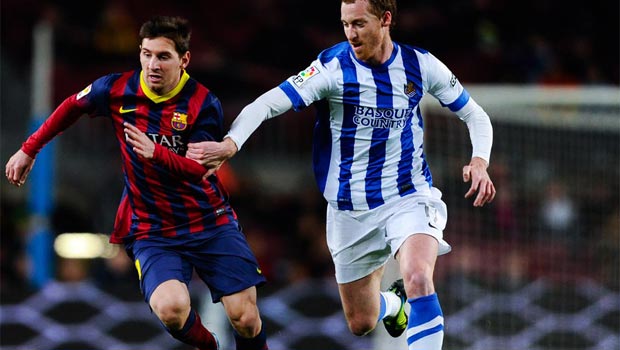 Barcelona had to rely on an own goal to help them to a 2-0 victory over Real Sociedad in Wednesday’s other Copa Del Rey semi-final first leg.

Before kick-off, Barca were odds-on to take a step closer to a potential final meeting with Real Madrid, but with Lionel Messi yet to show his true form since returning from injury, the Catalans struggled to stamp their authority.

Having said that, the little man did hit the bar with a free-kick late in the first half, but was guilty of a glaring close range miss a few minutes earlier, and in fact the visitors should have taken the lead on 42 minutes when Carlos Vela saw his shot saved by the outstretched foot of Pinto. He appeared to be pulled back by Javier Mascherano as he shot though, and may have had valid claims for a penalty.

Sociedad were made to rue that unlucky effort just a minute later when Sergio Busquets prodded home at the far post to give Barcelona the lead, and suffered a double blow when Martinez was then sent off for protesting to the referee over, it would appear, the alleged foul by Mascherano on Vela.

The second half was always going to be a struggle for Sociedad, but in truth Barca, despite having a man more, failed to land a killer blow until an amazing own goal on the hour calmed their nerves.

It began when Sanchez raced on to a Cesc Fabregas pass and saw his effort hit the post before defender Elustondo smashed the ball at his own keeper who had no chance as it ricocheted in to the net-a third own goal in the competition for Barcelona.

This tie may not be over yet, especially if Vela gets some reward for his efforts in next week’s second leg. Check out the latest Spanish football odds with Dafabet.