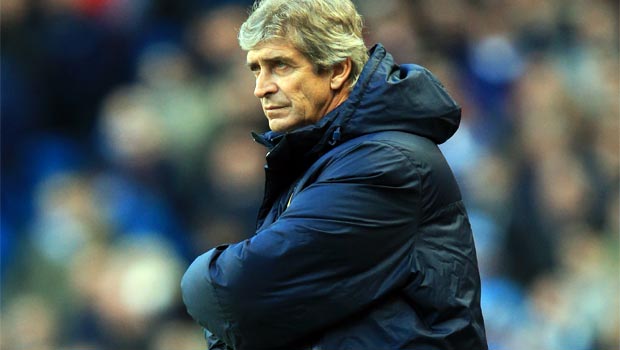 Manchester City boss Manuel Pellegrini promised to field a strong side in the first leg of the Capital One Cup semi-final and that spells bad news for opponents West Ham’s chances of getting to Wembley.

Pellegrini’s weakened selection slipped up at Blackburn Rovers on Saturday in the FA Cup and they will now face a replay, costing the players a chance to play a lucrative friendly in the sun this month.

But City’s Chilean coach is ready to recall Yaya Toure, Vincent Kompany, Pablo Zabaleta, Samir Nasri, Joe Hart and Aleksandar Kolarov to his starting line-up at the Etihad Stadium – where he hasn’t lost a domestic match since taking over in the summer.

City are unbeaten in their last seven home matches against the Hammers and their superb form at the Etihad Stadium this season (13 wins from 14 matches) should see them take a first-leg advantage to east London for the return clash, but don’t rule out an away goal for Sam Allardyce’s men.

West Ham have scored in four of their last five visits to the blue half of Manchester and Allardyce’s side have managed two in each of their previous away trips in this season’s competition, although that was at Championship high-flyers Burnley and Tottenham.

However, West Ham’s current form – four defeats in their last five matches including a 5-0 thumping away at Nottingham Forest in the FA Cup last Sunday – suggests they are likely to crumble under an avalanche of attacking football from Pellegrini’s men.

Even without Sergio Aguero, who is due back from injury this month, Alvaro Negredo and Edin Dzeko have the firepower to score more than three goals over the course of the 90 minutes, with over 3.5 total goals in the match available to be backed at 1.920.

And the hosts’ expected supremacy over their struggling opponents is likely to be reflected in the final score with Manchester City -2 on the 3-way handicap a value bet at 1.91, given that Pellegrini’s side have won by three or more goals in eight of their 14 home games this season.