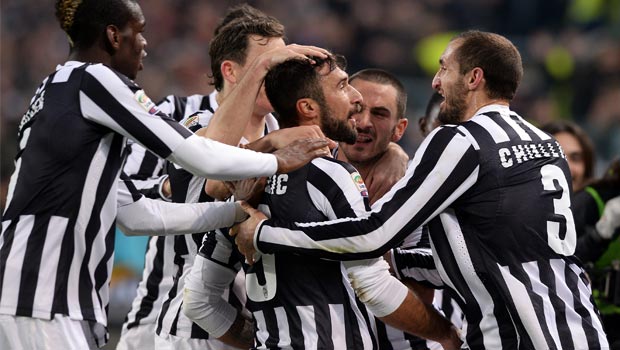 Juventus general manager Giuseppe Marotta insists the Italian giants are not “particularly interested” in strengthening their squad in January.

The Bianconeri extended their lead at the top of the Serie A table on Monday with a 3-0 win over nearest rivals Roma and are happy with their current squad, according to Marotta.

Striker Mirko Vucinic has been heavily linked with a move away after struggling for regular action this season, while Parma’s Jonathan Biabiany and PSG star Jeremy Menez have both been linked with moves to Turin.

Marotta, however, claims his club have no plans to delve into the transfer market during January.

He told RaiDue: “Vucinic to leave? We don’t want to give anyone in January. Biabiany and Menez? They are very good players but we are not seeking players like them, the group is strong. We are not particularly interested in the January market.”

Midfielder Paul Pogba has been linked with the likes of Arsenal and Chelsea in recent weeks but Marotta is confident Juve can keep hold of the Frenchman and hopes to convince the 20-year-old to agree new terms at the Juventus Stadium.

He said: “Pogba is a very good football player and so the eyes of big clubs are on him, but we don’t want to sell him.

“We will soon talk with his agent about his contract too.”

The futures of veteran midfielder Andrea Pirlo and coach Antonio Conte have also been called into question, but Marotta expects both to remain with Juve.

He added: “Pirlo has a contract expiring in June, but the relationship between him and the club are excellent and very soon he will extend the agreement.

“The Conte cycle with Juve can also last in the long term.”