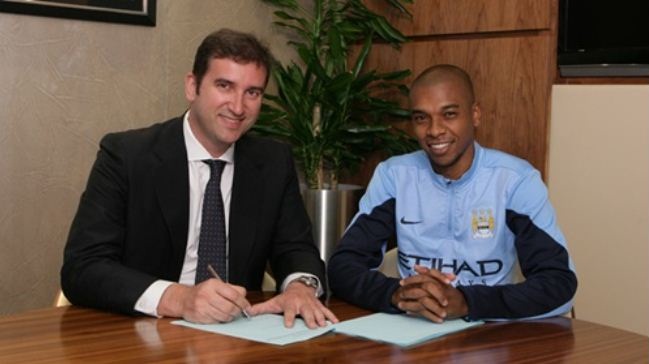 City fell way short in their bid to defend the Premier League title last season as Manchester United secured the top prize, and the Etihad Stadium outfit have already started splashing the cash ahead of the 2013/14 campaign in a bid to reclaim the league crown.

Winger Jesus Navas is set to sign from La Liga side Sevilla in a £15million deal, although Navas’ arrival has been delayed as he is on international duty with Spain and as such has been unable to complete a medical.

No problems are anticipated regarding the capture of Navas, and Fernandinho’s arrival was confirmed by the club late on Thursday.

City have not disclosed how much they have paid for the box-to-box midfielder but reports suggest the fee is in the region of £34million.

The 28-year-old Brazilian is used to winning titles, in eight years with Shakhtar he landed six league crowns and four Ukrainian Cup trophies, as well as picking up a UEFA Cup winner’s medal in 2009.

Fernandinho is delighted to have secured a move to City and now hopes to pick up more silverware with the Manchester side.

He told the club’s official website: “This is a change, a challenge and a chance that I have been waiting a long time for.

“Playing in the Premier League for City is like a dream. My ambition here is to win all the titles, the team here is strong, and so is the greatness of the club and the supporters.”

Fernandinho’s arrival could well spell the end of Gareth Barry’s time with City and the dynamic new arrival will almost certainly form a formidable partnership with star man Yaya Toure.

City’s latest recruit will be desperate to impress in the Premier League next season in order to force his way into the Brazil squad for the 2014 World Cup.

Fernandinho has been capped five times by his country but is yet to establish himself as a regular for the South American heavyweights.