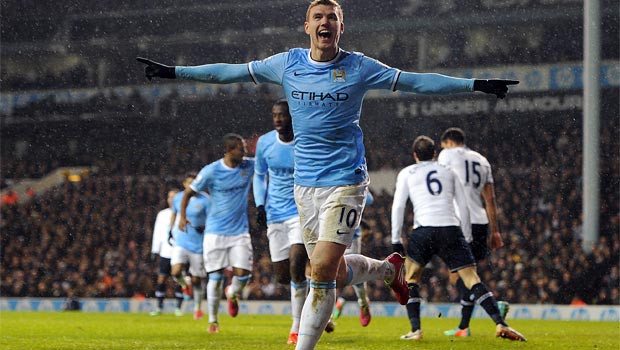 Manchester City may have climbed to the top of the Premier League table but their 5-1 victory at White Hart Lane on Wednesday night has given manager Manuel Pellegrini one cause for concern.

Scorer of the first goal against Tottenham Hotspur, Sergio Aguero was forced to leave the field just before the break after a picking up a hamstring injury, which could see the Argentine miss a crucial clash against Chelsea on Monday.

Aguero has only just recently returned from a spell on the sidelines after suffering a calf injury and now the Citizens, who are 1.85 to beat Chelsea at the Etihad Stadium, are sweating over the striker’s fitness.

The former Atletico Madrid star, who bagged his 26th goal of the season against Spurs in the capital, is now facing a nervous wait to see how long this new hamstring injury could leave him out of action for.

Fortunately for Pellegrini, the Chilean has a number of alternative options for the games ahead, as they look to maintain their place at the top of the pile.

Alvaro Negredo has taken very little time to adapt to the English top flight and he should be nearing full fitness after what appears to have been a relatively minor shoulder injury.

Edin Dzeko has always proved to be reliable and his recent performances in cup competitions will hold him in good stead as well as a goalscoring display against Tottenham.

To add further strength in depth Stevan Jovetic got his name on the scoresheet on Wednesday and will be hoping for some more game time in the coming weeks after a slow start to life in Manchester following his move from Fiorentina.

Needless to say Pellegrini is not short on options and will still fancy adding to City’s impressive goalscoring tally this season when they face Chelsea early next week, with the Londoners at 4.40 to cause an upset and bag the three points.