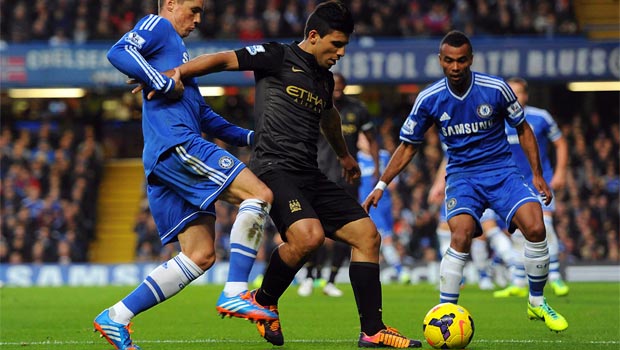 Jose Mourinho says Chelsea have no intention of sitting back and defending against Manchester City on Monday night and will go all out for the win.

City have been in outstanding form at the Etihad Stadium this season and have yet to drop a point, crushing the likes of Tottenham and Arsenal along the way – hence they have been installed as 1.87 favourites to maintain their 100 percent record.

Manuel Pellegrini’s side have won all 11 games, scoring an impressive 42 goals in the process, and there have been suggestions Mourinho will go with the intention of trying to take a point, with a draw priced up at 3.46.

Chelsea were criticised for their tactics following a goalless draw at Arsenal earlier in the season, while they have also battled to away points at Manchester United and Tottenham.

Chelsea are 4.42 to take the three points tonight and Mourinho says the aim is to win.

“City score goals. Normally, when your approach is very defensive, if you concede a goal you are in trouble.

“Or you have to make changes during the game and you never know how the players adapt to it.”

City will be without top-scorer Sergio Aguero who is out for a month with a hamstring problem, but Mourinho says that does not matter as they have a goal threat throughout the side.

“He’s a fantastic player, but he’s one of so many,” Mourinho added.

“Even the fourth striker (Stevan Jovetic), coming off the bench, comes on and scores (in Wednesday’s 5-1 win at Tottenham).

“For the last months Sergio was injured and the third striker, (Edin) Dzeko, was making the difference and scoring a lot of goals.

“So for them it’s not important if somebody is injured.”

Chelsea will be without their match-winner from the first meeting between these sides, Fernando Torres, but may include January signing Mohamed Salah in their starting line-up for the first time.