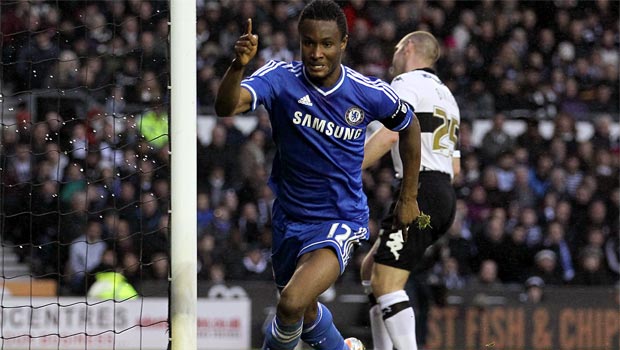 A rare goal from John Obi Mikel set Chelsea on the road to an FA Cup third round victory at Derby County on Sunday.

The visitors were always going to be favourites to win the tie despite the fact that Derby boss Steve McLaren has fashioned a side currently sitting fourth in the Championship.

McLaren packed the midfield in a bid to stifle the visiting attack, and the plan worked a treat until the 66th minute when John Obi Mikel, who had taken the captain’s armband from Michael Essien on his 300th appearance in a Chelsea shirt, rose to power home a cross.

In truth, Jose Mourinho’s outfit laboured somewhat to create chances until Hazard and Torres were introduced in the second half, but they put the tie beyond doubt with 19 minutes to go when Oscar’s low shot from the edge of the area proved too strong for the keeper to stop.

However, the result was somewhat overshadowed by the yellow card given to Ramires for simulation. Replays confirmed that the referee got it right, with no defender near the Brazilian as he went down in the area at the end of a mazy run.

Mourinho preferred not to dwell on the matter as he summed up his side’s performance: “At half-time the message was that we needed extra intensity and to put them in more difficult situations.

“We made the changes to bring extra attacking players on, so we could hurt them more.

“The team played seriously, we won and did a good job.”

The reward is a fourth-round home tie with Stoke, the only all Premier League contest in the draw.