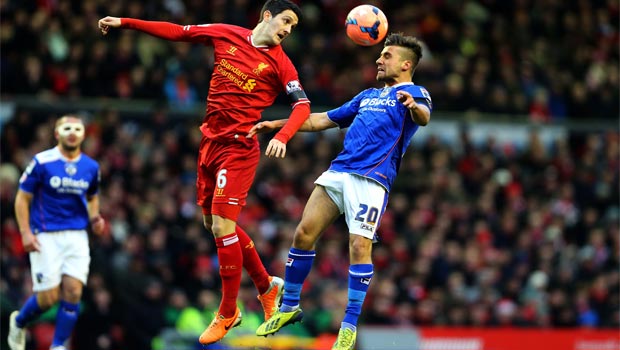 Liverpool gained revenge for last season’s FA Cup exit at the hands of Oldham by securing a 2-0 third-round victory at Anfield on Sunday.

The visitors would have been relieved at not having to face Suarez from the kick-off, and wasted no time in making their physical presence felt, Tarkowski being booked after just one minute for a foul on Steven Gerrard.

In truth, the home side toiled to make any sort of breakthrough in the first half, with Rodgers seeing enough to bring on Coutinho and Lucas for Alberto and Moses, neither of whom took their chance to shine.

The deadlock was finally broken on 54 minutes when Aspas expertly wrong-footed the Oldham keeper to volley home a cross from man-of-the-match Raheem Sterling.

The Spaniard then saw a header rebound off a post before the home side finally killed the game off after 82 minutes when Tarkowski deflected Sterling’s low shot into his own net.

By then the Reds were down to 10 men, with Agger limping off two minutes earlier, and all three substitutes already used.

The manner of this victory once again highlighted the lack of depth in the Liverpool squad, with Rodgers reluctantly having to call on his more senior players to change things round.

“I had to do it, We needed more speed and intensity to our game,” he said.

“You can either wait for it to happen or do something about it because the last thing we wanted was a replay.

“Coutinho and Lucas added intensity and purpose to our game. It was a difficult game and you have to give Oldham a lot of credit for making it that way. We were nowhere near the speed of our game and in the second half we were a lot better.

“You hope to rest some players and give them a recovery period because they’ve had hard games.”

Liverpool will now travel to either Bournemouth or Burton Albion in the fourth round.