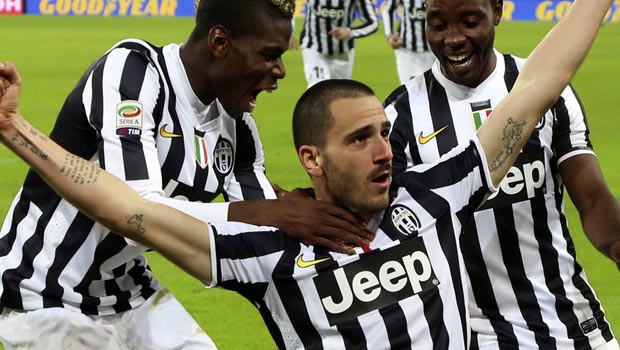 Juventus are in pole position in Serie A after beating their nearest challengers Roma 3-0 on Sunday evening.

The visitors arrived in Turin having yet to be beaten under new coach Rudi Garcia, and with high hopes of ending Juve’s one hundred per cent home record.

Roma had only conceded seven goals all season, but were put to the sword by the dual champions, who took the lead through Vidal after just 18 minutes, the Chilean converting after good work by Tevez.

Juventus kept probing for the killer second goal, and it duly arrived just four minutes into the second half when Pirlo found Bonucci completely unmarked at the far post.

Totti failed to find his range for Roma as they battled to get back into the contest, and after he was substituted, things went from bad to worse as first De Rossi was sent off for a poor tackle on Chiellini.

From the resulting free-kick Castan punched Bonucci’s header off the line and was also shown a red card.

Vucinic stepped up to take the resulting penalty and made no mistake to make it 3-0.

Juventus now have 49 points and one hand on a third successive trophy, but coach Antonio Conte realises there is still some way to go before they can celebrate.

“I am only ever moderately satisfied until we achieve our targets so this is just a stepping stone,” he said.

“There’s an entire second half of the season to go and we must do well. These eight points are important, but must not become an illusion because if they rob us of the concentration and desire we need, then we’ll be in real trouble. Anything could happen.”

Napoli are hot on the heels of the leading pair and are still chasing a coveted Champions League place, while fifth placed Inter Milan will hope to get something at Lazio on Monday evening to stay in the hunt.