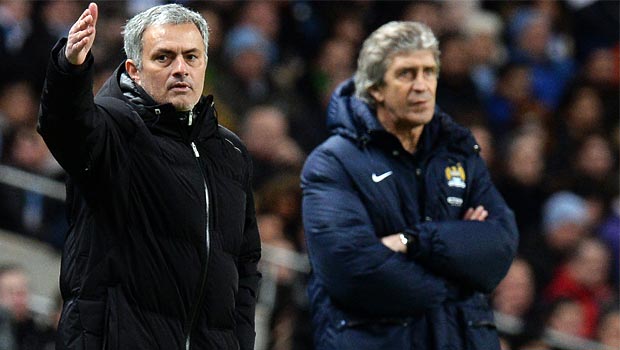 Chelsea manager Jose Mourinho has once again insisted that Manchester City are the favourites to win the Premier League title this season, despite the Blues going seven points clear at the top of the table.

The Stamford Bridge outfit thumped a dismal Tottenham team on Saturday, running out comfortable 4-0 winners in the end after strikes from Samuel Eto’o and Eden Hazard along with a quick-fire brace from Demba Ba gave them the three points.

The result means Chelsea have gone seven clear of Liverpool in second place and now nine in front of Manchester City in fourth, strengthening their title claims.

However, Mourinho still believes the blue side of Manchester are favourites for the title due to the games in hand they have over his team.

“I would like to be in their position, because if they win the matches they are top of the league, If we win the next nine matches, we may not be champions,” he said.

“If Manchester City win the 12 matches they have, they are champions.
They have their destiny in their hands and we don’t have ours.”

Chelsea are currently on a fantastic run of form in the Premier League, having not lost in the 10 games, winning eight of the matches and drawing just two.

Next up for the Blues is an away clash against a resurgent Aston Villa side who are still scrapping for survival in the top flight, and Mourinho’s men are heavy favourites at 1.41 to make it another win and move them a step closer to the title.

The home form of Chelsea has been a platform for their impressive standing in the league and the victory against Tottenham means that their Portuguese manager is still unbeaten at Stamford Bridge in 75 appearances, highlighting the strong title credentials of the side.