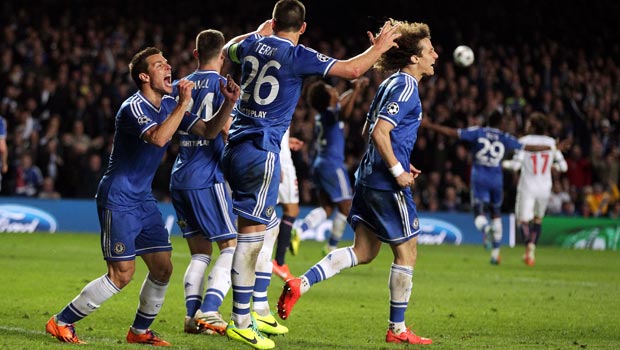 Chelsea defender David Luiz has called on his teammates to use the belief gained from their Champions League fightback to their advantage in the Premier League title race.

The Blues earned themselves a place in the semi-finals of the Champions League after coming from behind against Paris Saint Germain at Stamford Bridge on Wednesday.

PSG carried a 3-1 advantage following a first-leg victory in Paris, but Jose Mourinho’s side overturned the deficit with a 2-0 home victory that saw them progress on the away goals rule.

Luiz has now moved to motivate his teammates by encouraging them to take the belief from their European fightback and install it into the last few games of their domestic campaign, with the Blues currently two points off the pace at the top of the Premier League.

The Brazilian international said: “It’s still possible to win the league, so come on, let’s enjoy the position we are in and believe, like we did against Paris St Germain.

We need to have faith because we can still do it.

“Mathematically it’s still possible but every game in the Premier League is difficult, as it will be on Sunday,” he added.

A victory over Swansea on Sunday could see Chelsea emerge from the weekend atop the table as first place faces third when Liverpool host Manchester City earlier in the day.

The Blues require Liverpool to lose that fixture if they are to return to the summit of the Premier League, as the Anfield giants superior goal difference would likely see them retain top spot, should they draw and Chelsea win.

Mourinho’s side may face a lengthy trip to Wales to face Swansea, but that hasn’t hampered their chances of emerging victorious, with the Blues priced at just 1.80 to scalp a victory at the Liberty Stadium.

The Swans are 4.67 to earn a surprise success which would help them enormously in their relegation battle, whilst a draw between the sides is currently priced at 3.33.