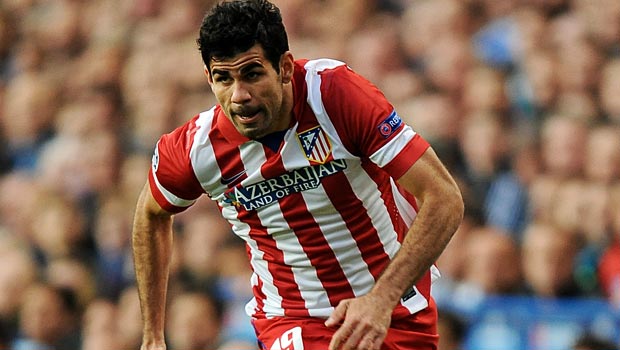 Chelsea have agreed to pay £32million to sign Atletico Madrid striker Diego Costa after boss Jose Mourinho identified a lack of goals as a key reason behind their trophy-less campaign.

The Portuguese tactician was a frustrated figure this past season as his current crop of forwards – Samuel Eto’o, Fernando Torres and Demba Ba – scored only 19 goals between them, while Costa has bagged 27 in 33 La Liga appearances for Atletico and 36 in 50 outings in all competitions.

The 25-year-old Brazil-born Spain international’s goals have helped Atletico reach the Champions League final, where they will face city rivals Real Madrid in Lisbon on May 24, while they require just a draw from their final La Liga game at Barcelona this weekend to clinch their first domestic title since 1996.

It is Costa’s record which has tempted Mourinho into blowing a huge chunk of his summer transfer kitty as he wants to bridge the goals void between Chelsea and last season’s title rivals Manchester City and Liverpool.

The Blues managed 71 goals as they finished third in the table while champions City hit 102 and runners-up Liverpool scored 101.

Mourinho hinted that he would be looking to bring in a prolific forward in the summer transfer window after their penultimate game of the season when relegated Norwich held them to a 0-0 draw at Stamford Bridge on May 4.

He said: “Our strikers are good strikers, no doubts about that. But… they are not the kind of players in five square metres, with three or four players around, they can get the ball, they can dribble on, they can see the space, they can make the shot.

“So when the team is in a difficult situation they are not able normally to resolve the situation for us.”