Chelsea: Arsenal game the one to win for Eden Hazard 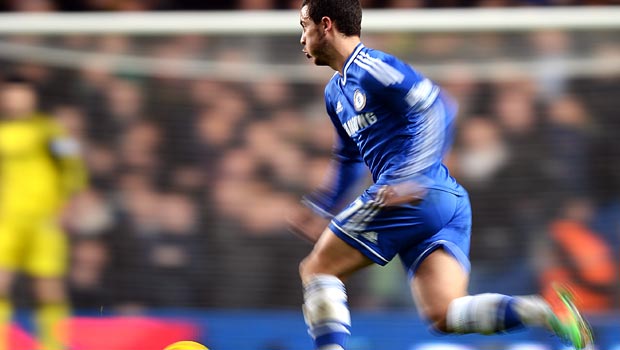 Chelsea playmaker Eden Hazard says there is no better way to respond to last week’s defeat at Aston Villa than by beating title and locals rivals Arsenal on Saturday.

The Blues’ 1-0 loss at Villa Park last weekend allowed Manchester City, Liverpool and the Gunners to close the gap at the top of the table and they are now just four points clears.

The chasing pack all have games in hand on Jose Mourinho’s side as well and, with under two months until the end of the season, it is shaping up to be a nail-biting title race.

City are the current 2.30 favourites to win the Premier League, with Chelsea priced at 2.90 to be crowned champions in Mourinho’s first season back at the club.

Hazard claims he understands how important winning the league is to the fans, and as such is determined to help the west London outfit get back on track by beating Arsenal.

The Belgian felt Tuesday’s 2-0 Champions League win over Galatasaray provided something of a response to the loss at Villa but admits a win over their capital rivals will be even more significant.

“The Champions League is rare because you play less often but the Premier League is so important to us and we know how important it is for the fans too,” said Hazard.

“The game against Arsenal comes at an important moment because it follows league defeat.

“We are going to do our best in front of our own supporters in what is a big derby game. There is no better one to win.”
The Gunners head to Stamford Bridge looking for a first win over a Chelsea side led by Mourinho.

In what will be Arsene Wenger’s 1,000th game in charge of Arsenal they are 4.22 to win at Stamford Bridge, with Chelsea 1.89 to get back to winning ways in the league.