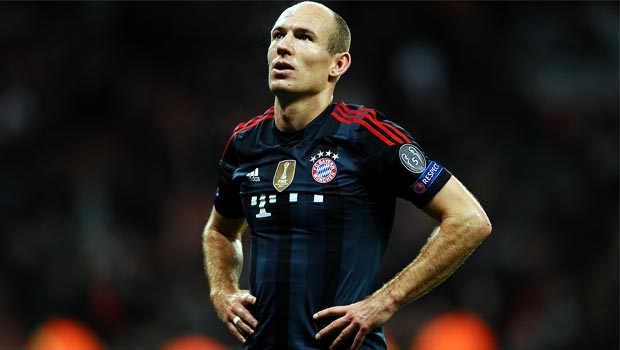 Arjen Robben has fired a warning to Manchester United and the rest of the Champions League after revealing that Bayern Munich are looking to prove that they are the ‘most dominant team in Europe’.

Die Roten swept all before them last season and are on course to repeat the feat after retaining their Bundesliga crown in record-breaking fashion in midweek.

Bayern were surprisingly held at the Allianz Arena by Hoffenheim on Saturday, surrendering a 3-1 lead in a 3-3 draw, but that is perhaps understandable with the title already in the bag and other thoughts on their minds.

Pep Guardiola’s men take on Manchester United in the first leg of their Champions League quarter-final next Tuesday and Robben insists that the players started focusing on Europe’s elite competition, rather than celebrate, following Tuesday’s title-clinching win.

The Bavarian giants are priced at 2.70 to defend their Champions League crown and Robben believes that the team will justify favouritism when they travel to Old Trafford next week.

“Guardiola has turned us into the most dominant team in Europe. We have made another giant step as a team this season,” Robben said.

“We are more dominant than we have been. From the very first minute we put massive pressure on our opponents and are capable of keeping the ball and putting them under pressure for the full 90 minutes.

“Guardiola is very demanding. He asks a lot from his players. Every day it is so intense, but I love that.”

Bayern have already won in England this season, defeating Arsenal 2-0 at the Emirates in the first knockout round, and they are installed as strong 1.43 favourites to win next Tuesday, with the draw on offer at 4.26 and United available at 6.85.

There are sure to be few taking on the big price about the home side given recent hammerings meted out by Liverpool and Manchester City at the Theatre of Dreams, even though Bayern will be without playmaker Thiago Alcantara, who has been ruled out for six to eight weeks with a knee injury sustained against Hoffenheim.