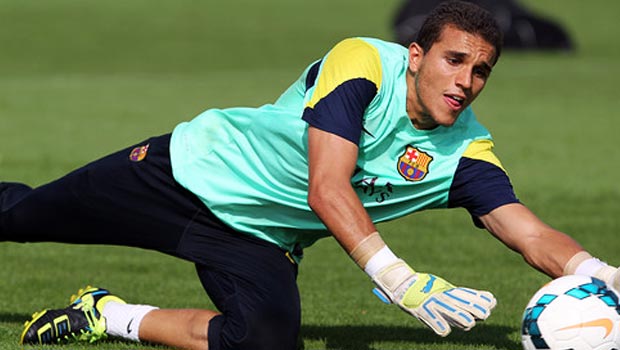 Barcelona goalkeeper Jordi Masip insists he is relishing the opportunity to battle it out for the number one jersey with new recruits Marc-Andre ter Stegen and Claudio Bravo.

Masip is a graduate of the famous La Masia academy and joined the club at the age of 15, playing under boss Luis Enrique in the Barcelona B side.

The 25-year-old has been on the fringes of the first team for the last season but was third choice behind the experienced Victor Valdes and Jose Pinto, who have both left the Nou Camp this summer.

Masip has been involved in first team training and insists that the competition for a starting berth has helped all three goalkeepers to raise their game.

Masip said: “I’ve always played with competition, ever since I was young. It’s good because it helps you improve.

“He’s [Ter Stegen] a good guy who wants to learn a lot, to learn Catalan and Castillian. He’s a very good goalkeeper with good footwork, strong in the air and with plenty of room to grow.”

The stopper revealed that he was looking forward to playing with striker Luis Suarez, who completed a £75million switch from Liverpool last week.

Suarez is banned from all activity concerning football for four months after being found guilty of biting an opponent at the World Cup, however, Masip insists he will only judge the Uruguayan for what he does for the club.

He added: “I will not judge the penalty because it’s a matter for the club. I want him here as soon as possible to help the team and give a lot of joy.”