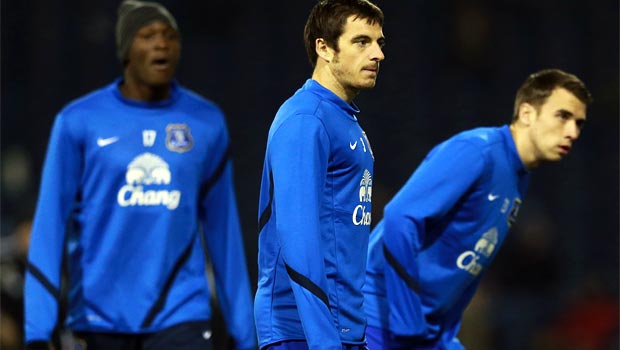 Everton have been boosted by the news left-back Leighton Baines has committed his future to the club by penning a new four-year contract.

The England international has been a target for former boss David Moyes, who failed with two bids to take him to Manchester United in the summer, so the news comes as a big boost to the Toffees.

Moyes was widely expected to make another attempt to sign him before the transfer window closes, but Everton fans can now rest easy as Baines is going nowhere for now.

Boss Roberto Martinez broke the news at his press conference ahead of Tuesday’s clash with Liverpool and it will not only give them a boost ahead of the derby clash, but for the rest of the season as well.

It is a huge statement of intent from Everton that they want to compete with the best and Martinez is delighted to have him tied down to a new deal.

“I can give you good news, Leighton Baines has signed a new contract. It is for the next four years,” he said.

“To be able to secure Leighton’s best years at Everton means a lot, especially in this January (transfer) window where we are talking about having a strong squad going into the second half of the season.

“We are all excited that Leighton will be able to have a long-term future with the club and we are all looking forward to the second half of the season having his experience.

“It is such a specialised position it is a great boost internally but I know fans will be delighted because Leighton is more than a footballer at the club.”