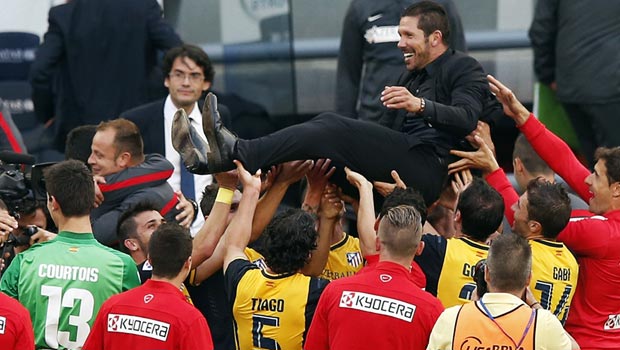 Atleti secured the Spanish title on Saturday with a 1-1 draw at Barcelona, with Diego Godin scoring a second-half equaliser to secure the crucial point.

It is Los Rojiblancos’ first La Liga trophy since 1996 and they managed it on a far smaller wage and transfer budget than Barcelona and Real Madrid, who finished second and third respectively.

Simeone believes the victory is a major stepping stone for Atletico Madrid, defining it as one of the greatest days in the club’s history, and credited his players for making it happen.

“It’s amazing,” Simeone said. “You can’t explain it. Thanks to the players.

“Today is one of the best days in the history of Atleti.”

Defender Godin meanwhile applauded the head coach for his half-time team-talk at Camp Nou, when the team were trailing 1-0.

“To hold off Real Madrid and Barcelona has been difficult.

“Simeone told us at half-time that we were definitely going to score and justice was done.”

Atleti will now prepare to face Real Madrid in the Champions League final on May 24.

After coming from behind to secure the league title on Saturday, Simeone’s side can be found at a price of 12.00 to come from behind and beat Real in Lisbon.