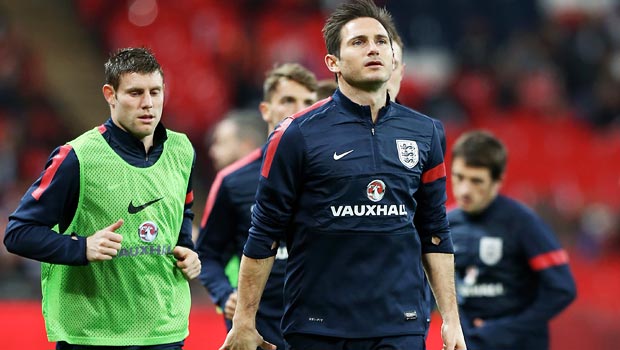 Chelsea midfielder Frank Lampard has been confirmed as England’s vice-captain for the summer’s World Cup in Brazil.

Lampard has captained England six times during in his career and usually steps in when current skipper Steven Gerrard is absent.

The Chelsea vice-captain has now been chosen by England boss Roy Hodgson as the deputy to Gerrard for the World Cup finals in Brazil.

His experience at international level is looked on favourably by Hodgson and may have been the deciding factor as the manager chose Lampard over striker Wayne Rooney.

“Frank’s been the vice-captain all along in Steven’s absences, which I think has been twice,” said Hodgson. “He’s stepped up quite brilliantly.

“I’ve always thought that he was going to be a key member of this 23 because of his experience and what he brings to the team apart from pure footballing ability.

“He brings a lot of other things to us in terms of his leadership qualities and characteristics.”

Lampard, 35, became only the eighth player in history to make over 100 caps for England when he came on as a substitute against Ukraine in September 2013.

He has 103 caps in total, scoring 29 goals for the Three Lions, and this will be his third appearance in World Cup finals.

At the 2010 World Cup in South Africa, Lampard became the first player since 1966 to have 37 shots on goal without scoring a goal.

He was, however, denied a goal in controversial fashion when a first-half shot in England’s round-of-16 match against Germany hit the crossbar and bounced over the line before coming back out.