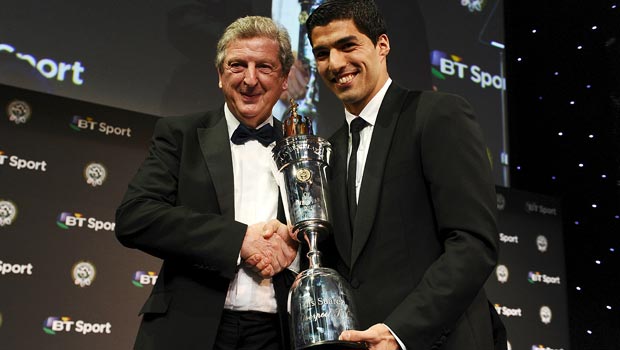 England manager Roy Hodgson is refusing to get “hung up” about the threat posed by Luis Suarez at the World Cup.

England have been drawn in a group alongside Uruguay, who boast a talented strike force in Suarez and Edison Cavani.

Suarez was named the PFA and Football Writer’s Player of the Year in the Premier League this season after scoring 31 goals in 33 appearances for Liverpool.

He also made 12 assists for his team and has been identified as a threat to England ahead of the Group D match against Uruguay on June 19.

But while Hodgson admits he has been in exceptional form this season, the Three Lions boss believes he could struggle in Brazil alongside a different set of players.

“Suarez is my player of the year,” Hodgson is quoted as saying in the British press. “I’m not trying to take anything away from him, he’s had a wonderful season. He’s an exceptional player, with exceptional ability.

“But he’s not alone. He won’t have at Uruguay the same players he has around him at Liverpool. So who knows? Maybe he’s less effective with Uruguay than for Liverpool.

“I think it would be a big mistake to get hung up on any individual player no matter how much you respect their ability.”

Suarez scored three goals at the 2010 World Cup and despite Hodgson’s comments is among the favourites to finish as the top scorer in Brazil with a price of 17.00.

Striker partner Cavani has described him as the best player in the world and is confident his experience in English football will help him get the better of Hodgson’s side.

“Luis knows the England team very well – and his experience in the Premier League will help us beat England,” Cavani said in a recent interview.

“He is the best striker in the world at the moment and I am sure he will carry on this form into Brazil.”

Uruguay are considered second favourites – above England – to qualify from Group D at the World Cup. The South American side are valued at 1.38 to qualify and 2.60 to win the group, while England are 1.55 and 3.00 respectively.