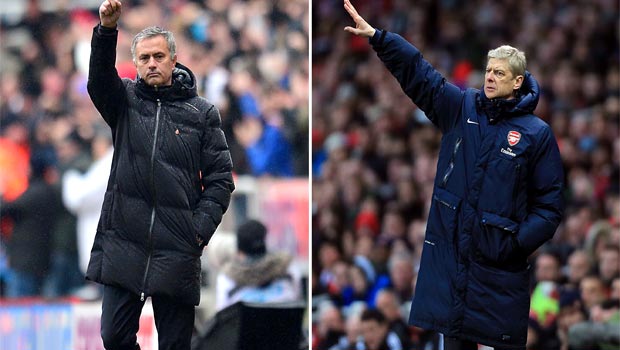 Arsenal manager Arsene Wenger has entered the mind games at the top of the table and suggested that the Premier League title is “Chelsea’s to lose”.

Chelsea boss Jose Mourinho has continually played down his side’s chances of winning the title despite the fact that the Blues are sitting pretty at the top of the standings.

The Portuguese tactician has suggested that fourth-placed Liverpool should be feared as they are not in European action in the coming weeks while he has continued his broadside at Manchester City counterpart Manuel Pellegrini.

The Gunners are in second spot just one point behind Chelsea and it looks set to be a thrilling run-in to the end of the season, with many twists and turns ahead.

When asked about the title race, the Frenchman made it clear who he sees as the favourites.

“It is very open,” he said. “But only Chelsea can lose it because they are in front and all the other teams can win it.”

Wenger has always maintained that Arsenal can lift the trophy in May and has absolute belief in his team, and when asked why the likes of Mourinho and Liverpool boss Brendan Rodgers keep ruling themselves out of the race, he pulled no punches.

“I think just that our job is to be ambitious and to try to win, if we do not win to take full responsibility for that. That’s as simple as that and that’s how I see it.”