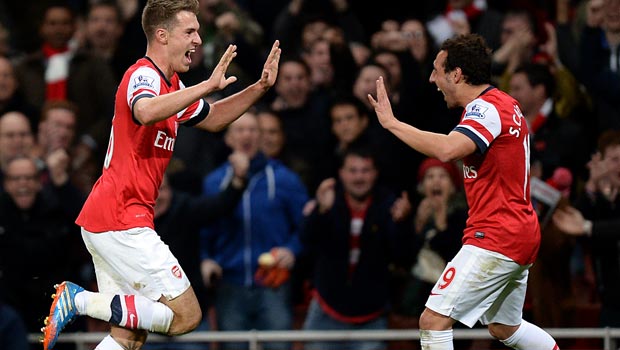 Aaron Ramsey and Santi Cazorla both believe Arsenal are on the verge of a successful new chapter in their history after the pair committed their long-term futures to the club.

The Gunners are in the process of trying to tie down their big-name players to new contracts and recently announced Per Mertesacker and Tomas Rosicky had agreed fresh terms.

They have now been joined by Ramsey and Cazorla, who have penned new deals having impressed at the Emirates Stadium over the last two seasons.

Wales international Ramsey was Arsenal’s star man before picking up an injury in December, scoring 13 goals to help kickstart the team’s challenge for the Premier League title.

Cazorla has tried to pick up the slack in Ramsey’s absence and has helped the north London outfit stay in the title race, as well as playing a big part in their run to the FA Cup semi-finals.

Arsenal are 1.36 to win the FA Cup this year while semi-final opponents Wigan are 9.00 to retain the trophy.

Spaniard Cazorla, who was voted Arsenal’s player of the season last term following his move from Malaga, says he was happy to sign a new deal with the club as he feels they will soon end a nine-year wait for a trophy.

“I think that we can be a big player in competing for the top trophies in years to come and that’s important for me,” said the 29-year-old.

“I have already had lots of good moments here and hopefully there will be many more to come.

“One of the main reasons for coming here was to get better as a player and joining Arsenal has definitely made me a better player.”

Ramsey has reiterated his team-mate’s sentiments and believes he has signed up with a club heading in the right direction.

Ramsey said: “I’m delighted to have signed a new contract. I’ve been here for six years and I’m so happy. I think we’ve shown so far this season what we’re all about and the direction that this club wants to go in.

Manager Arsene Wenger is delighted the duo – along with promising youngster Gedion Zelalem – have signed new contracts and is keen to see others follow suit.

Bacary Sagna’s deal expires in the summer and talks are ongoing with the right-back, while Arsenal are also keen to see Laurent Koscielny commit his future to the club.